Day 5
Day5, and still 8 days on Aitutaki. Slowly I won back my confidence that the luck will be on my side to fish all planned 7 guided days. When I planned the trip I thought the weather would be the least problem in the south pacific. Sometimes you are be wrong. On my fifth day the weather was not perfect either. Still a lot of wind and partially clouds, but the clouds where the smalles problem of all. Of course it made sight fishing for me more complicated but Rua, with whom I was fishing that day, had no problem spotting fish under such conditions. With Itu, we called each other every morning, I agreed with him every morning how we will fish, no matter if he will guide me or Rua. The guide that day was again Rua, joined by Junior, a trainee Guide, and fishing for Bonefish and partially for GT.

Same as the day before we tried firstly for GT, same place, same time. But we didn’t came to that spot. The wind was hard blowing towards the reef and we really struggled to float with the boat in the inner reef zone. The wind and the waves always pushed the boat towards the corals. Too dangerous, for boat, coral and us. In addition we were more focused not to hit a coral than spotting fish. So we decided very quickly to gave up GT fishing and went over to the hunt for bonefish to make the best out of the day. So we headed for the next flat to try our luck.

Been there, instantly I hooked up two nice yellowfin trevallies and lost both of them during landing. So far that was a good sign, so the bonefish couldn’t be far. I was happy too early because on that day the bonefish really behaved ultra sensitive. We spotted some of them but no bone had really interest on my fly. Either they spooked of just by the slowest movement of the fly or they simply ignored it. Also such days exist, but why it happened to me? Me, who traveled 20.000 kilometer over the whole world. At last, before lunch I hooked up one more good sized bonefish of 8-9lbs and a another small yellowfin trevally. I also had an interesting encounter with a puffer fish. The puffer fish. He looked on the distance like a bonefish but turned out immediately as something else. The bite was almost not to feal, it just felt like I hooked a coral or anything else big in the water. It was almost not possible to get him closer. If I wouldn’t have seen that it is a fish, I would have believed that I stuck on a coral. A few seconds later the puffer fish was gone and I received my fly back, cut in a half. Like with a scissor the fly was halved. 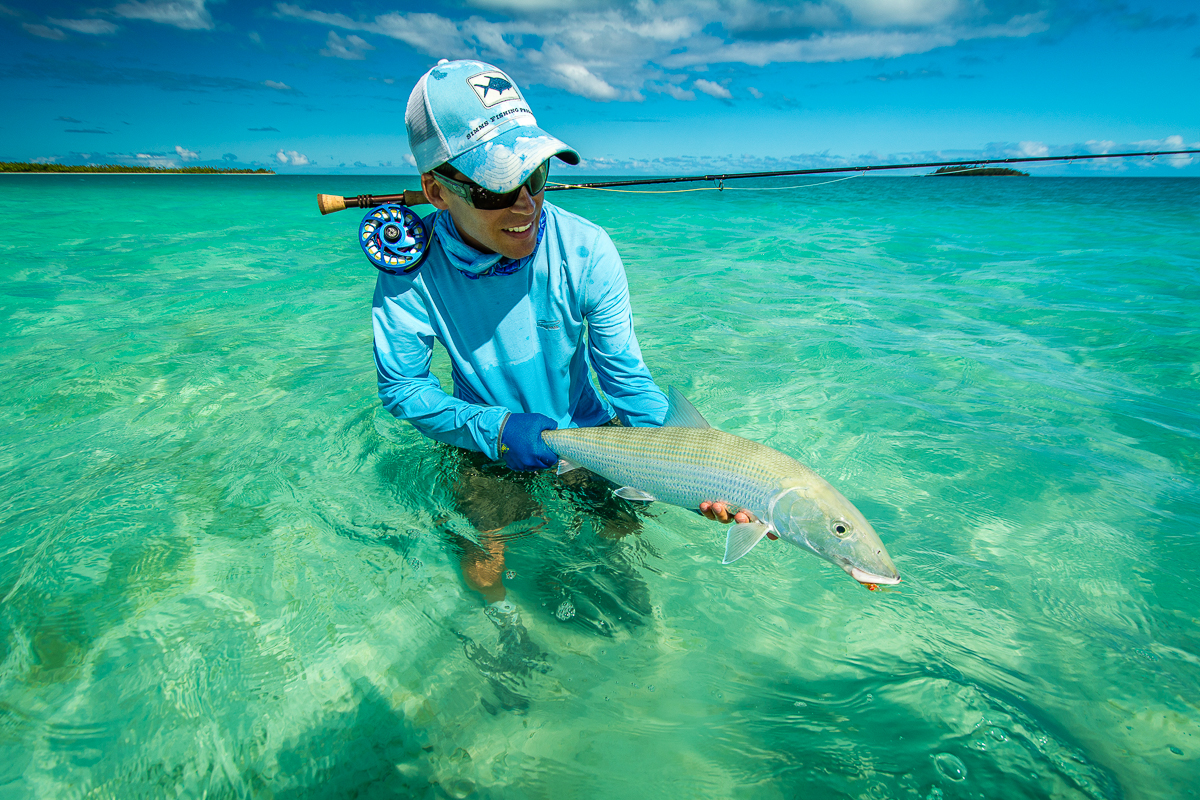 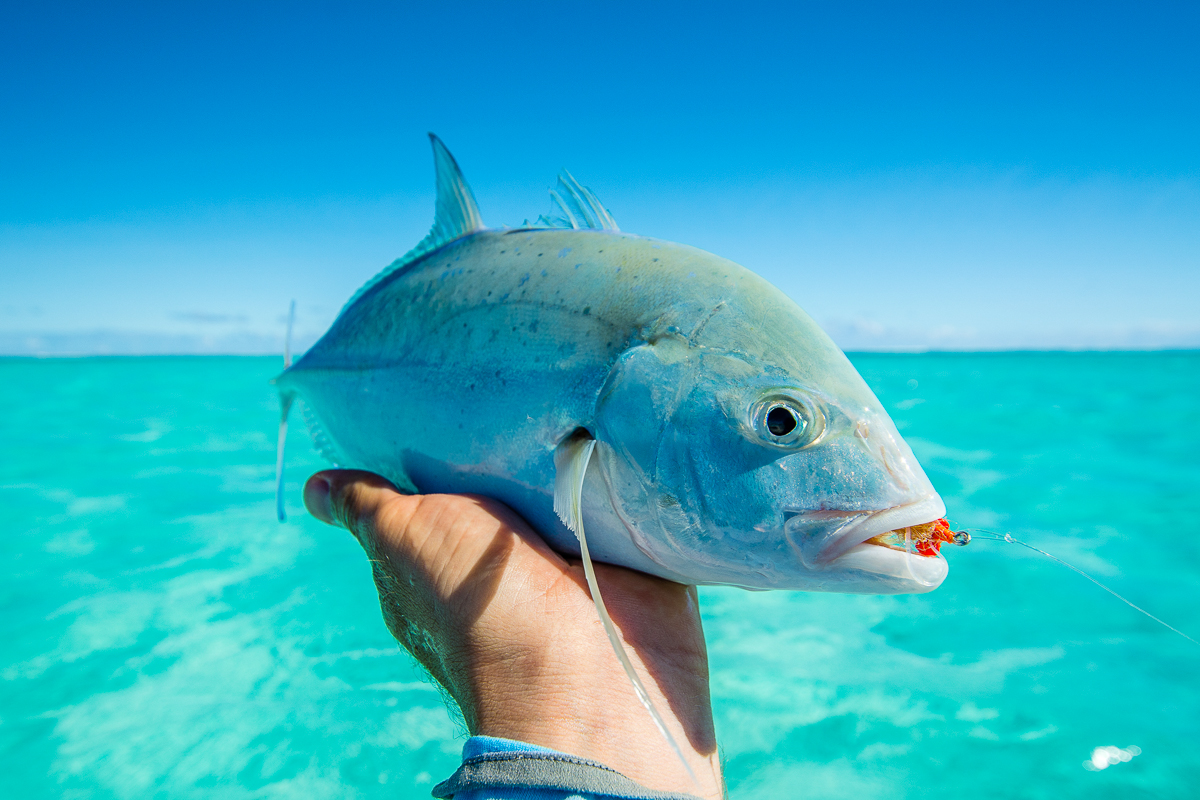 Lunch was planned again on one foot island. Yellowfin tuna sandwich was on the menu. Everything what was made out of tuna was excellent, so also this sandwich. Where to fish after lunch. The wind raised again and was not blowing towards the good spots. Only Tekopua and Akaiami was fishable, sheltered from wind. Tekopua we fished already in the morning so we planned for Akaiami. Just good to know, Akaiami was in the 1950 prepared for water planes for refill with gasoline before continuing with their flights over the pacific. The airline operated that time is now Air New Zealand. The island is a very typical palm island with only a small beach and the flat start shallow and gets deep pretty quickly. But you can see the bonefish sometimes patrolling on the shore line. Interesting but also hard to catch, no sorry, very hard to catch. So it went also for me. We saw some bonefish but most of them spooked for the smallest reason, although my presentation was not too bad. I consider Akaiami as to hardest to fishing flat out in the lagoon. 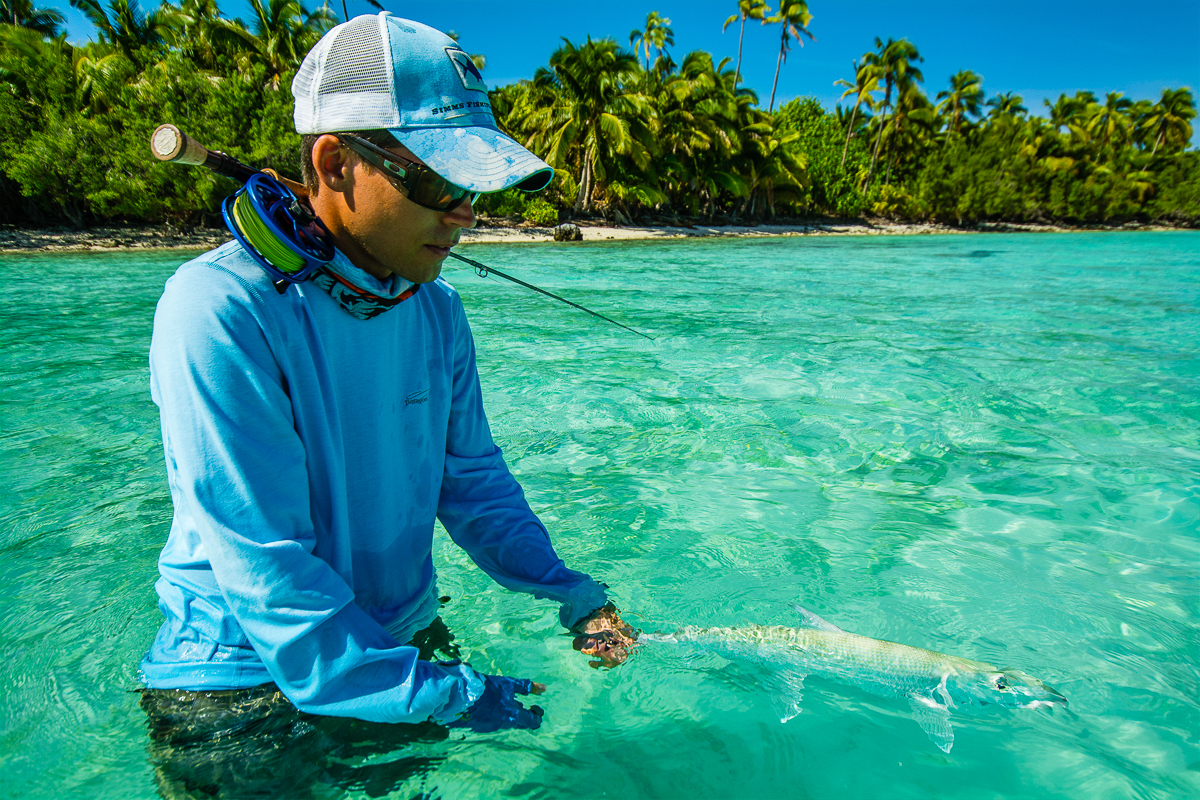 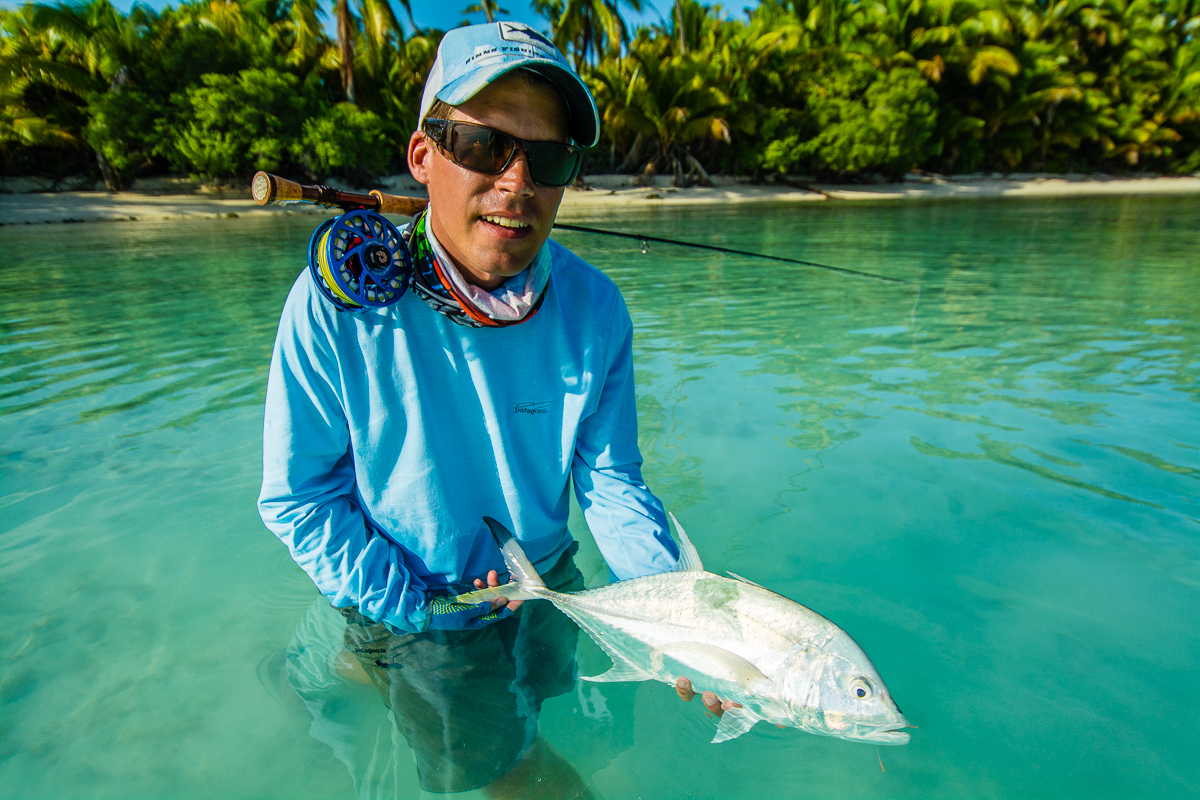 A little bit frustrated we started again on Tekopua, maybe there would be a another bonefish with mercy, giving me a bite. Directly at the start of the island I hooked up a very nice yellowfin trevally, the biggest I had so far. Compared to the bonefish these fish fight much more intense with less long runs but many pretty strong flights. For a fish with that size very impressive. I had the feeling even stronger than the small GT I hooked on the day before. But where are the bonefish? They were swimming all around us but again very selective on the fly. Rua and me tried all flies I had to offer and no fly really worked. In the end we went back and used the fly that worked all the days before. In the end I can’t say whether this was the best choise but I caught another bonefish, the last for this day. A medium sized one. Better than no fish, or?.