Let me remind to that day….. Its already more than a month ago but I still can remember like it was yesterday. We initially canceled that day fishing because the weather forecast said that it’s too windy. So I went out in the early morning for DIY fishing. I was 10 minutes on the home flat as my girl friend came running with the message that Kaleena, Itu’s wife is on the phone with the message that fishing can start because the weather became better. I think I made the 100 meters on the flat faster than Usain Bolt. On the phone Itu told me that Rua, his brother, is going to fish with me on that day and he will pick me up directly in front of our beach villa. 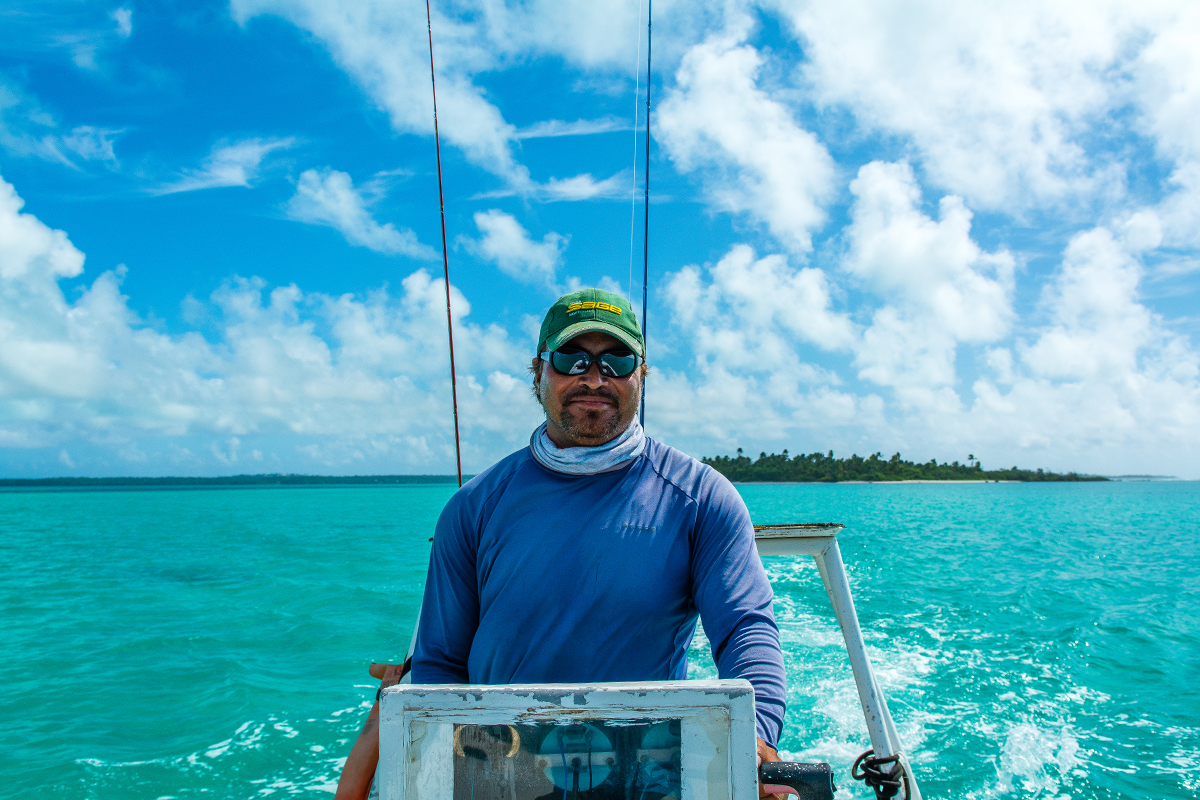 The tackle was already prepared, Itu visited me the day before and went with me through all my gear and told me exactly what I have to bring and how to rig up the leader, what flies to bring, etc. So is was ready for the first day. The next half hour past by like a full day, waiting for Rua. Itu said 8:15 to 8:30 Aitutaki time. That can be everything between 8:30 and 8:45, or even later :).. In the south pacific the time is running a bit slower. But Rua was in time and so we started in time for the fish. Not it will show if my expectations become true catching a boat full of fish.

Rua headed directly for the first flat. Now it was also the first time I have seen the beauty of this lagoon. The stunning blue of the water fascinated me from the first moment. You could really see the depth of the water by its blue or turquoise color. The shallower the water is the more turquoise was it, the deeper the more the color turned into a blue color. The first flat Rua headed for was quite shallow for Aitutaki. The flats here are usually not very shallow, at least not so shallow as it was in Cuba. The average depth was roughly 70-80 cm. OK enough said, the fishing began.

I took place on the tip of the boat, the casting platform while Rua moved to his working place, the sight platform a good meter above me at the back of the boat. I was ready, he was ready, now it was time for the bonefish. When will the first bonefish come by. Will it take long, will I do everything correct? Rua gave me a short introduction to his commands he will give me when a bonefish appears. But it didn’t take long and the first fish came by. Rua started with his instructions. “Get ready”, “Fish at 12 o’clock, 20 meter” Guess what? I haven’t seen the fish. It took 10 seconds till I decided to cast even I can’t see the fish. So I made the cast. Rua followed with nice cast? And the fish? He didn’t had much interest on my fly? What? Did you think I caught my first bonefish on the fist cast? No. It took 3 more casts before the first bonefish was at the end of my fly. Within seconds 50,60,70 meters of backing went through the guides. I said to Rua, this must be a trophy fish, but he just answered that this is a small fish. It was not a very big bonefish, one of the smaller ones, maybe 4-5 lbs but that fish kicked my ass like no other bonefish did before. 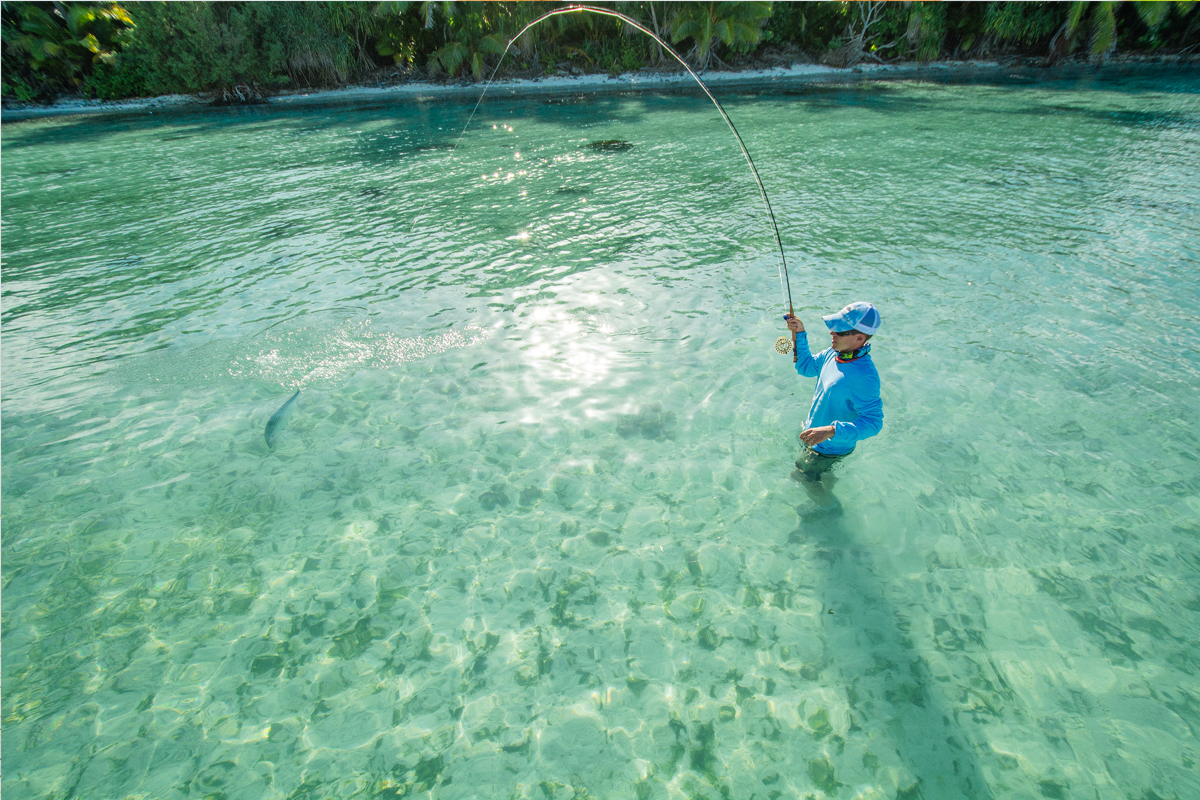 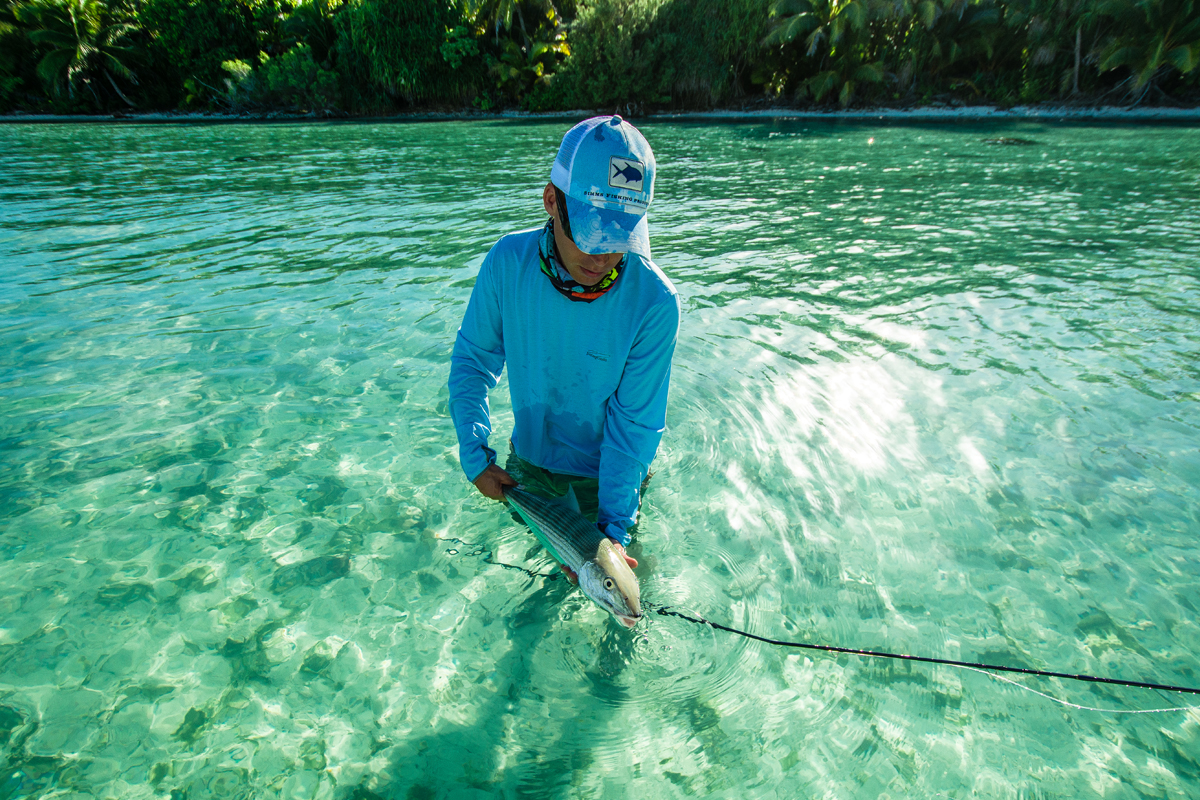 OK, that days starts nice. Maybe 10 minutes of fishing and the first bonefish is landed. 3 more similar sized bones followed on that flat before Rua started his instructions with a delicate extra. It was “Big bone 11 o’clock”. This time, also I have seen the fish, it was big and the fly landed directly where it should. Two small strips to attract the fish and he was on. The strike finalized all my hopes, the bone was hooked and he went within a blink to he end of my fly line. But not further then somehow the line tangled round the crank of my fly reel. Immediately the reel locked and the bone snapped the leader. You can’t imagine how easy a 17 lbs leader breaks. I fish the same leader while pike fishing and when I absently hook an obstacle, e.g. a tree I can pull the boat towards it. So my first big bone did get away. And a second one later two

We fished another flat with another two landed bones before we headed for a small lunch brake on one foot island. The island is called like that as an ancient warrior and his son tried to escape to that island to escape some enemies. The son went in the foot steps of his father to make the enemies believe that there is only one man on that island. The enemies killed the father and the son escaped. Today ony foot island is a tourist attraction with a small post office on it where the tourists can get a stamp into their passport. I wasn’t there for bonefish, just eating a tuna sandwich and heading for more bones. The mission for this afternoon, a big bone! 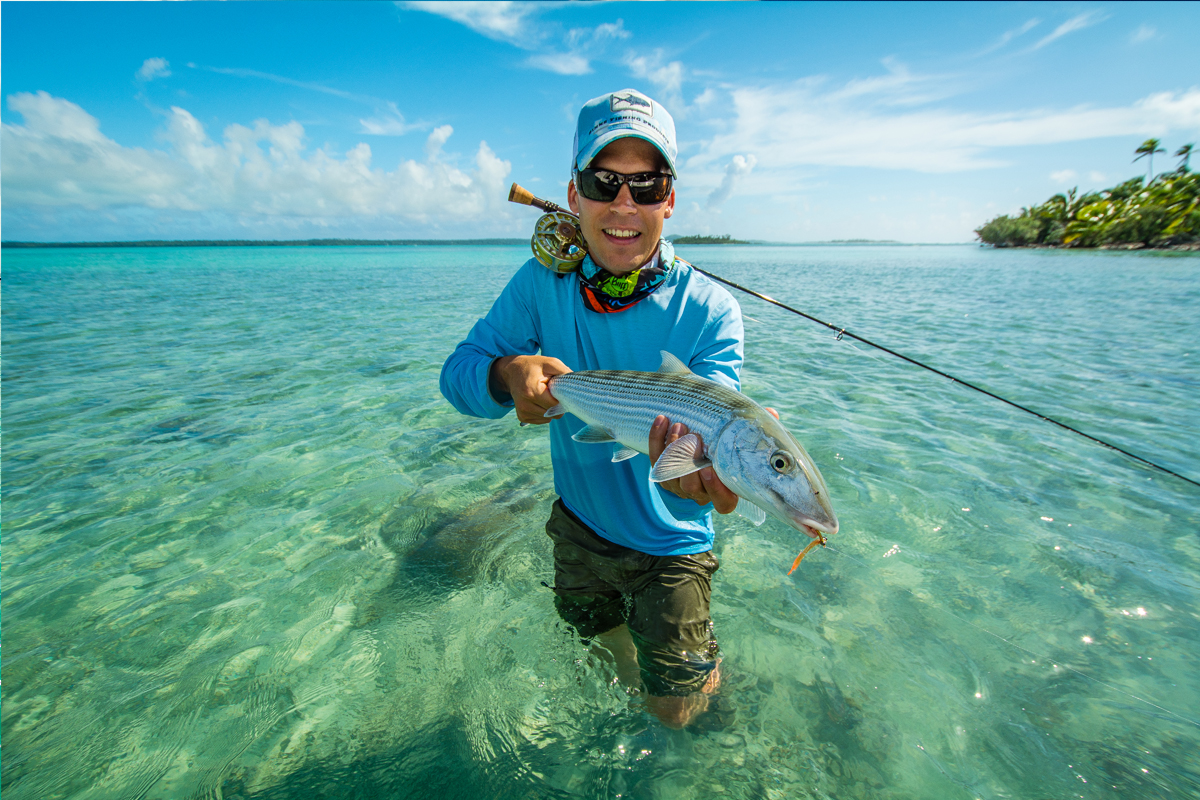 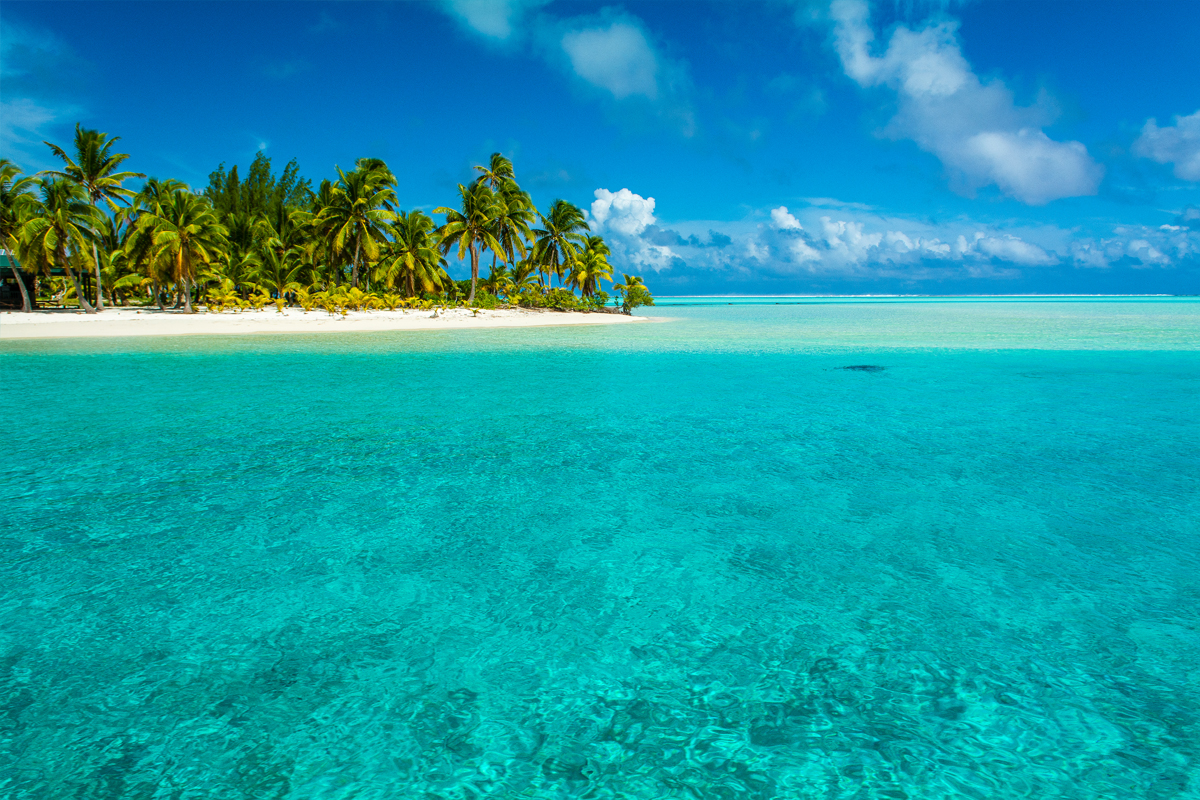 Rua had the plan, Moturakau. That island is know for big bonefish cruising around. But the fish were also a bit spooky there. At least that was my feeling. The rate of bones I spooked there was abnormal high. Usually you spook a lot bones on a day. Actually I’m a good caster, especially for usual client standards. But the water there was slightly deeper and if you move the fly too early or fast they spook. Nevertheless I hooked up that afternoon 2 more bones but not the expected big ones. The hope never dies till it is too late. And we had some more time to go. And there were a lot of big bones swimming around so I was sure it is just a matter of time till a big one was on. And they came from all directions. Once there was no reaction from fish A at e.g. 9 o’clock, cast at fish B at 12 o’clock and in case fish B was not interested, that fish C, D, E were targeted. Incredible. 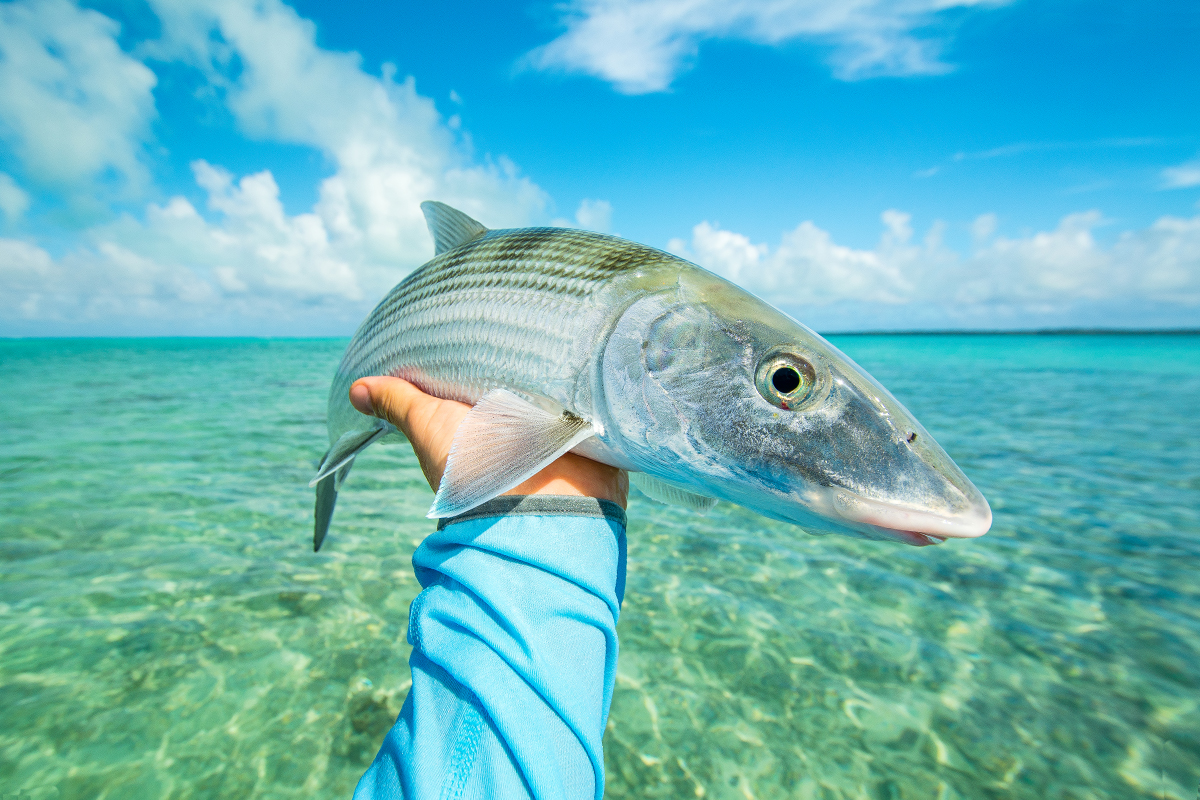 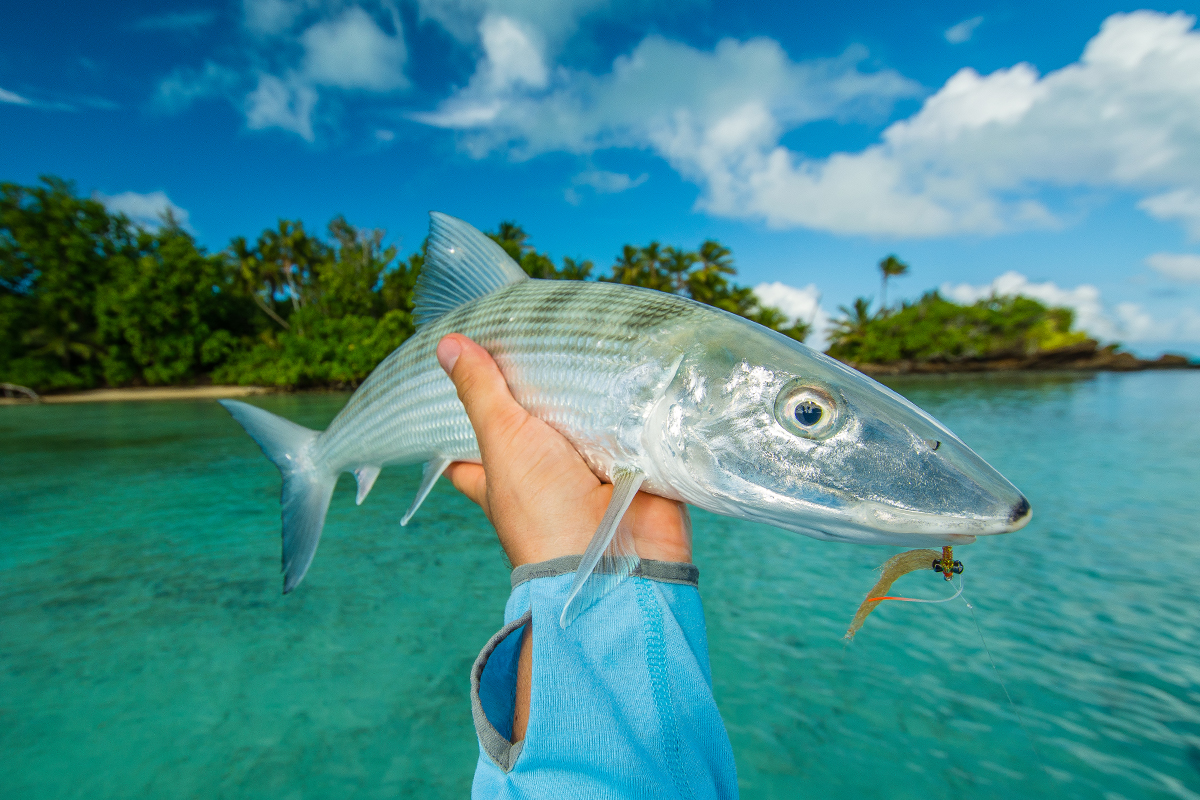 Still I was sure to hook the fish I wanted. And that fish came by. From the moment I hooked him I was sure that it was a big boy. Initially I thought the fish swims to the end of the lagoon. I had already fear I will run out of backing. The reel was backed up with 400 meters of backing. Sure half of it was out and I looked at Rua a bit scared. Then the fish stopped, and I started reeling in the like. That sounds easier than it is. Latest after 100 meters the arm starts paining. And then??? The fist starts again a run of not less than 100 meters. And once the fish stopped, winding in again. This time I got the fish close to the boat, but here the fight is not over. The Aitutaki bones do not surrender instantly, they fight till they completely loose their power. Carefully we landed him and released him to the beautiful blue lagoon. Rua estimated him to 8-9 pounds with a fork length of 66cm. 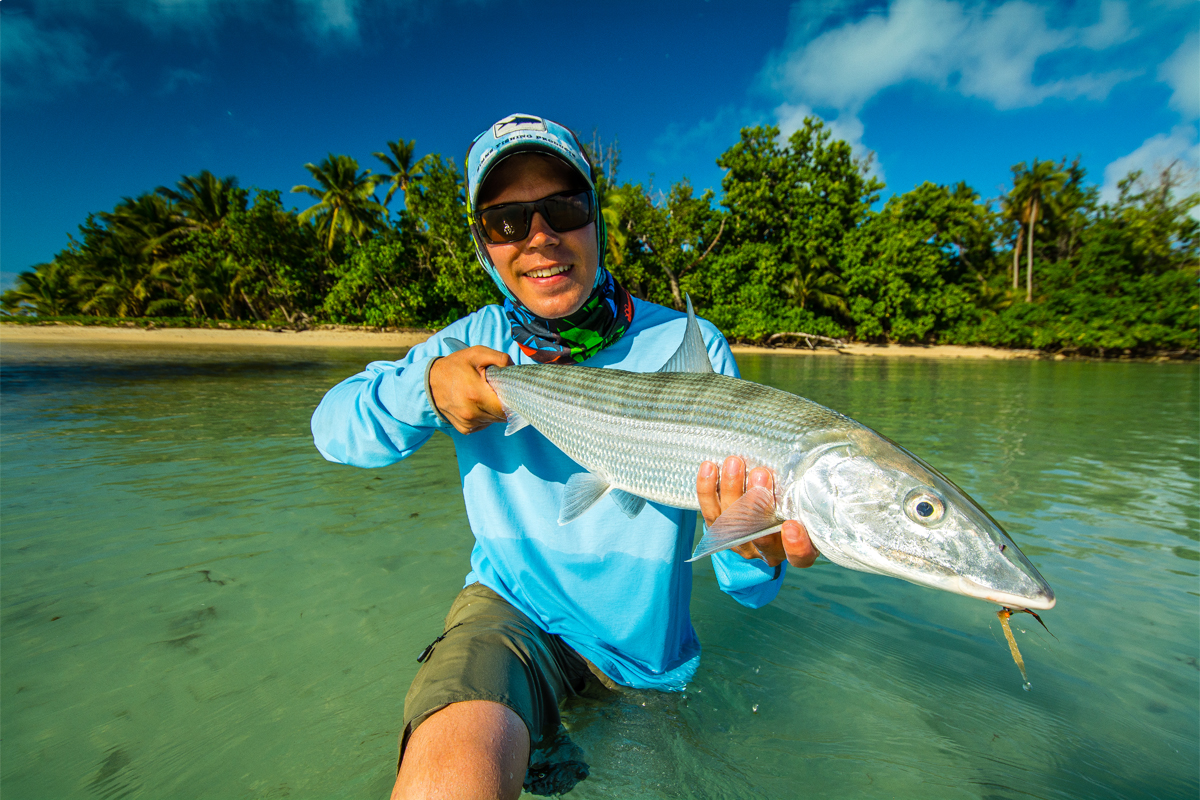 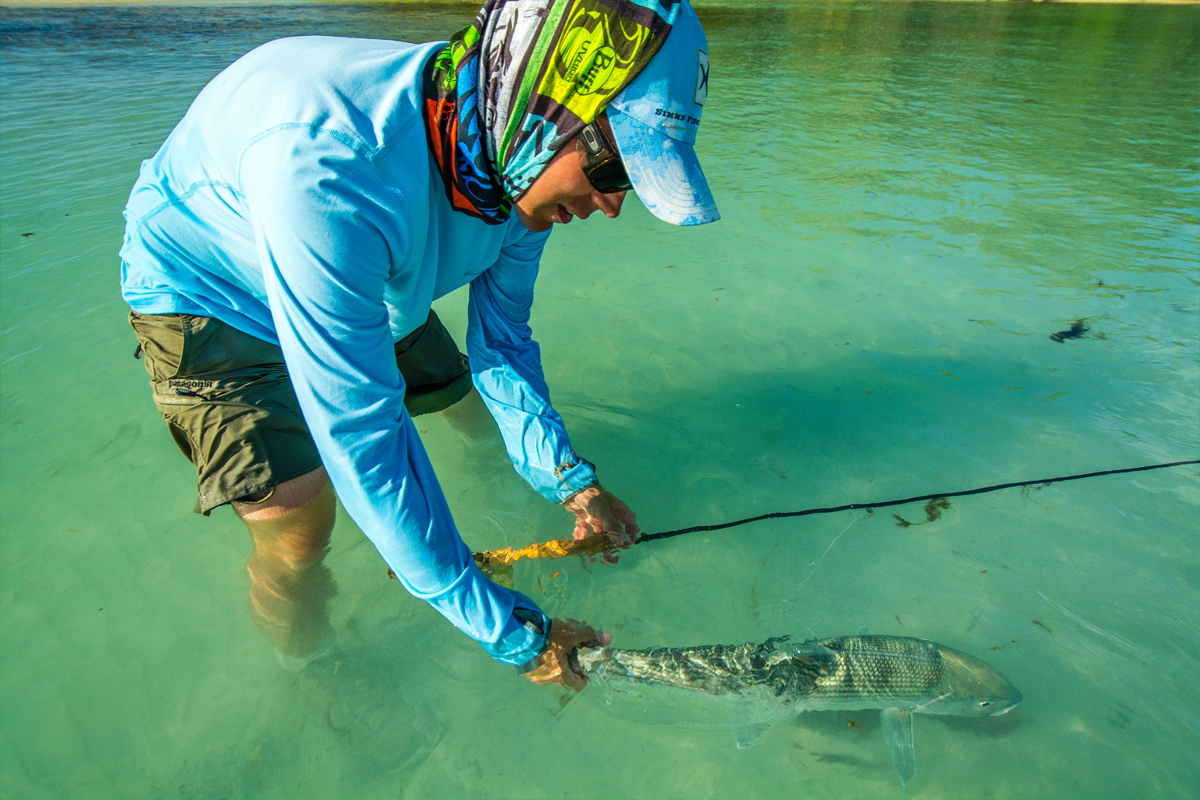 With this fish we ended our first day fishing, 8 bones landed 2 lost due to leader breakage. Rua was happy and me too. And I was confident that I will have 6 more fishing days of pure
fun. :)

see below some more pictures ;) 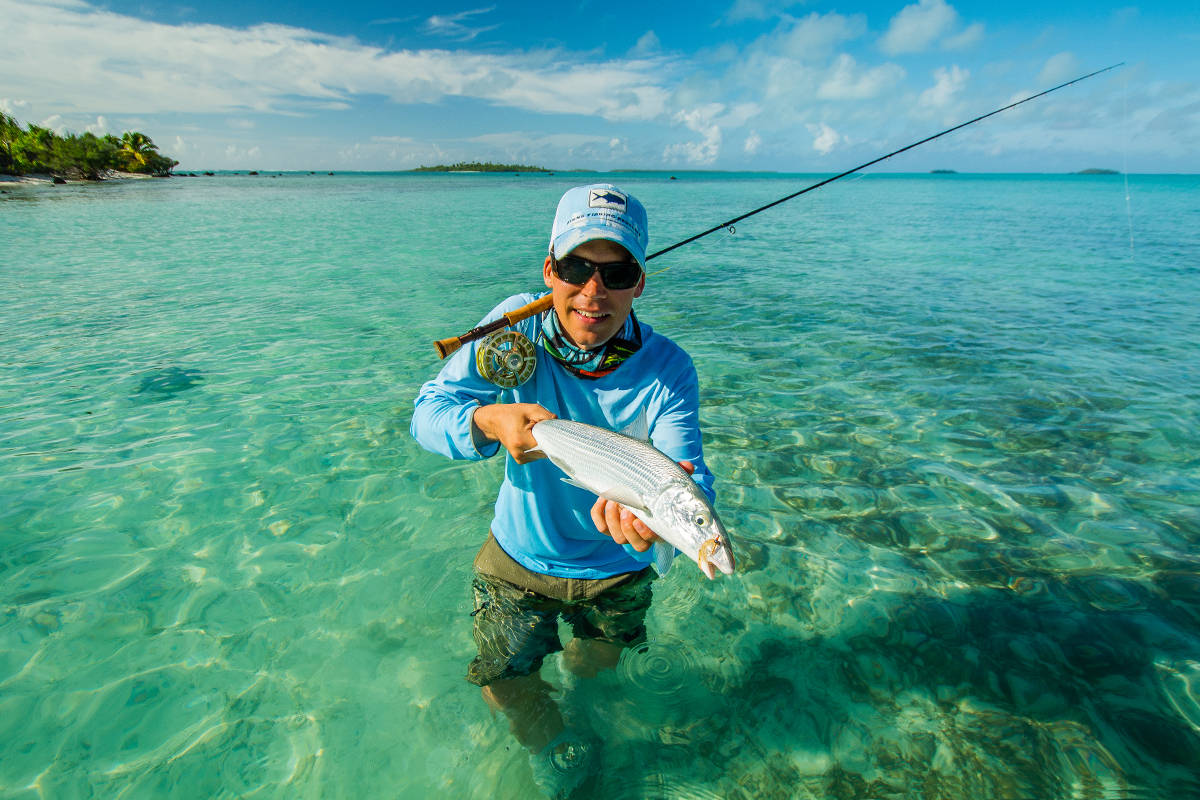 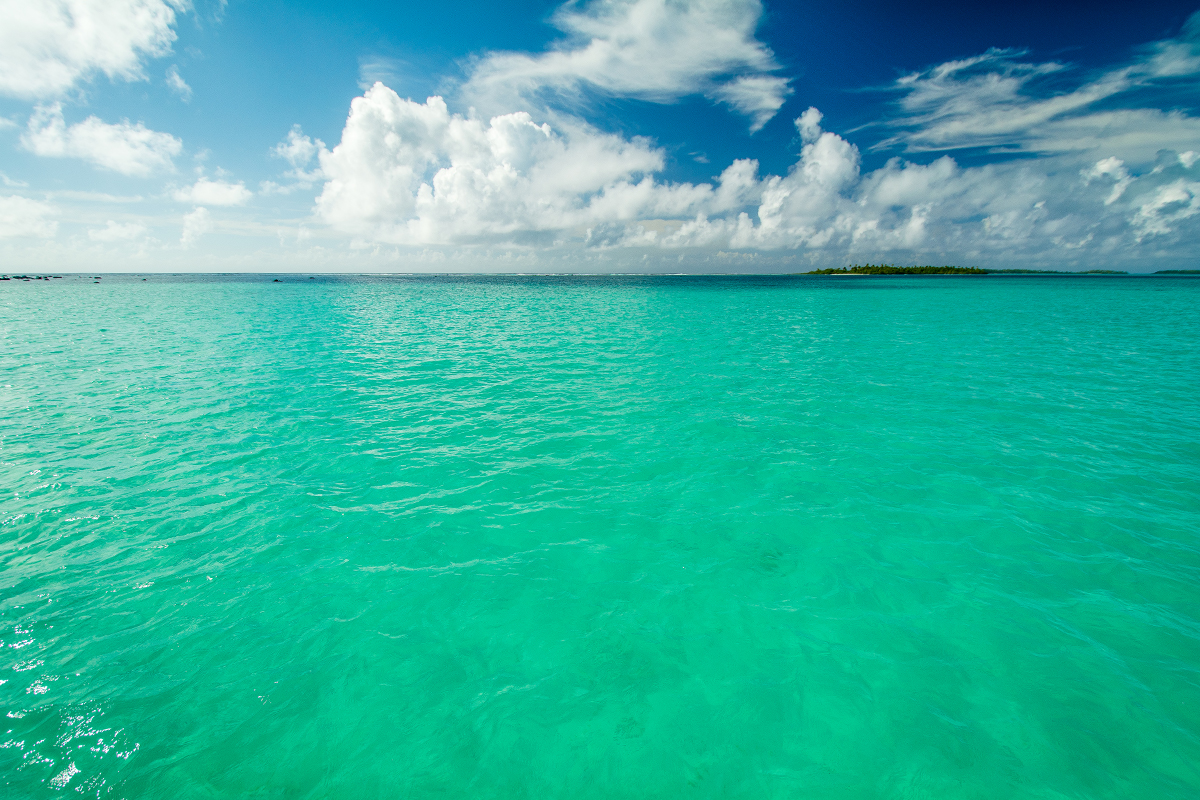 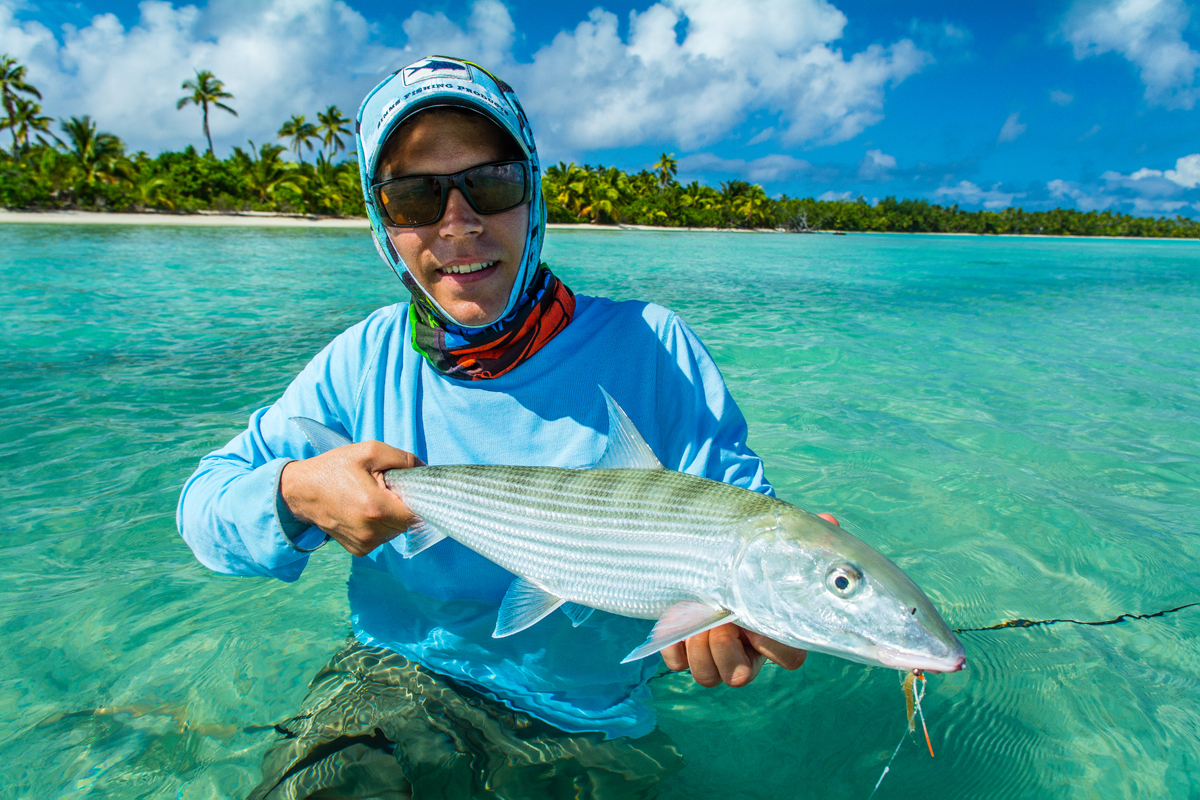 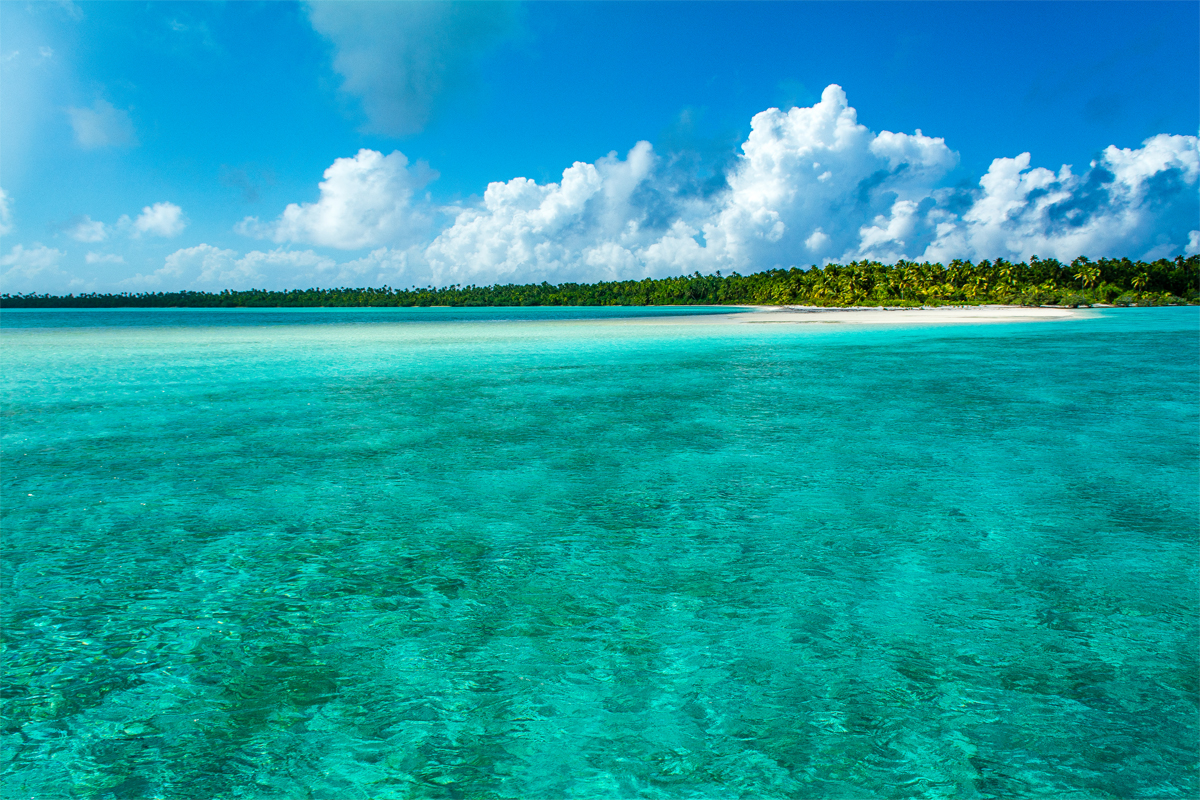 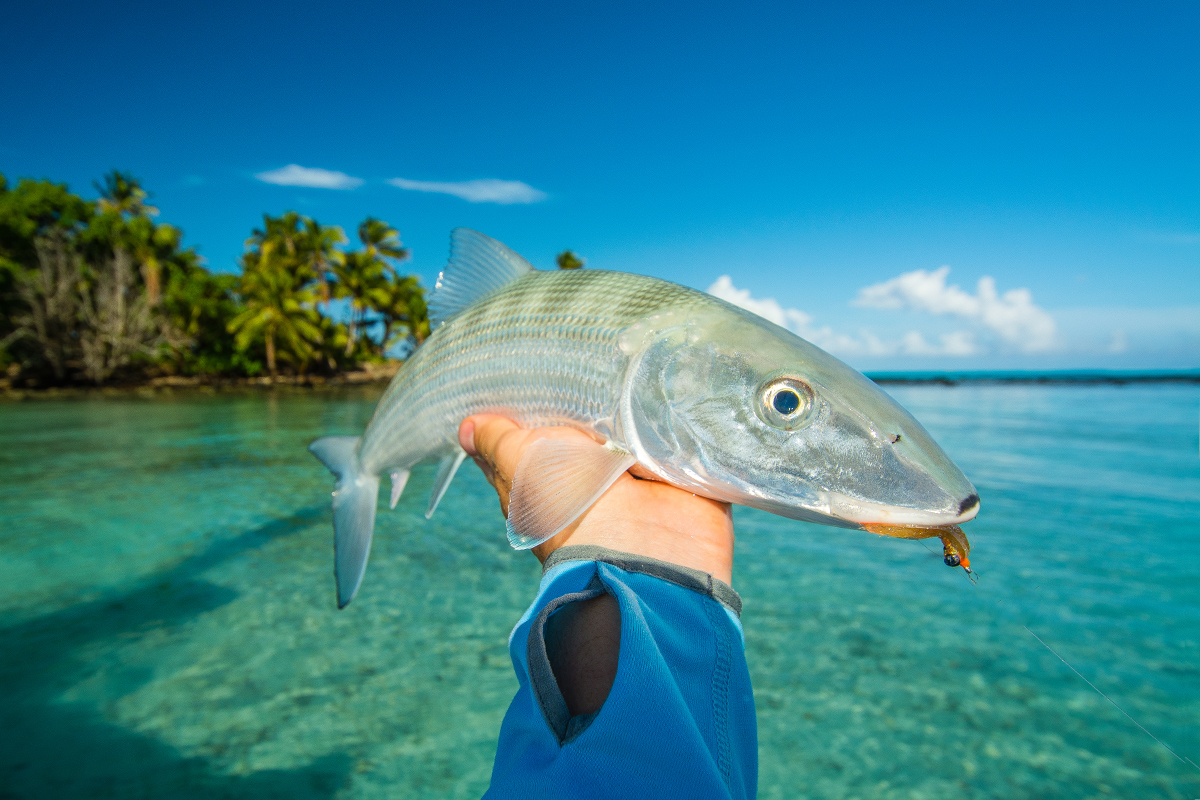