Last year I got a recommendation for a new fishing water. A water in the middle of a metropolis, Vienna. The city I’m living. It sounded like a fairy tale. No long rides to the water, no high expenses driving around for hours, no wasted time that could be better used with a fly in the water. But is this water really that excellent as many people say? Yes i heard from many people about that water. So I gave it a try …. see what happened during Season 2013 ….

The season began 1st of May. I was fishing with a friend from whom I got the recommendation. From him I also received my first introduction into a belly boat. Before that, this was completely new for me. Fishing from boat was the greatest, till then.
Immediately I hooked up a nice pike followed by a smaller one. 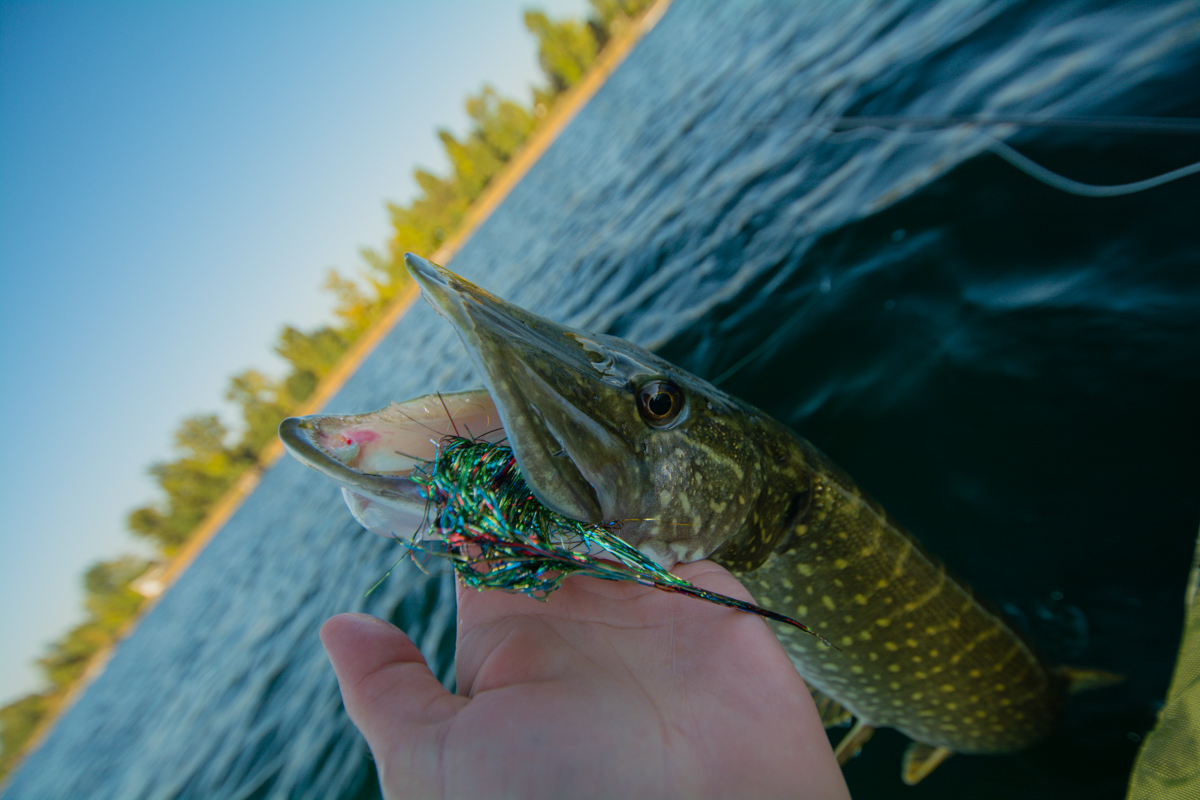 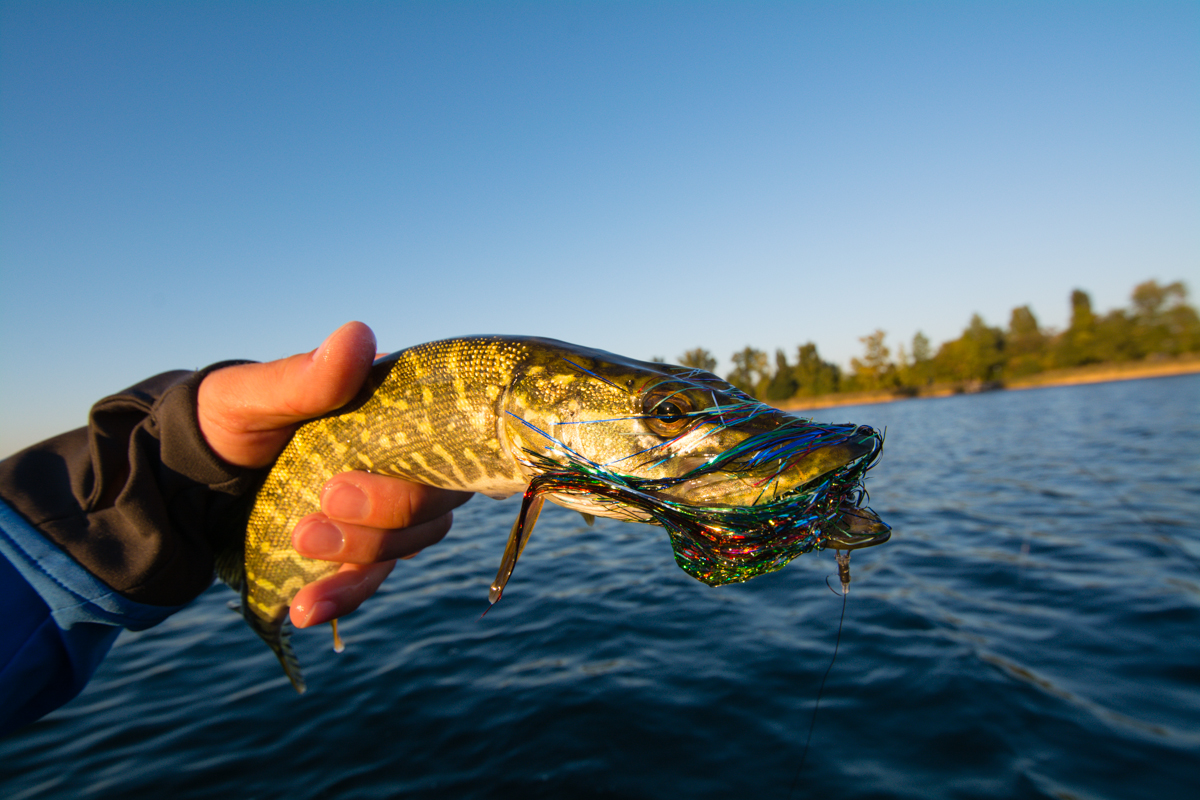 What was a bit unusual for me. The retrieve of the fly need to be ultra fast. This reminded me more to the saltwater fly fishery where you need a double hand retrieve. A very exhausting fishery. Immediately my arms got tired. But thats all forgotten when at the end of the line a fish is fighting.

some more pikes followed in a few sessions.

So the pikes love it fast. That’s not my favorite fishery. I prefer the slow retrieve when suddenly the line stops or a fierce strike goes through the line. That’s also the reason why is skipped fishery a bit and concentrated on waters where the fishery is more mine. My time will come….

Later that year all things changed.. And I was sure that it will happen. My theory was that when the water gets cold the pikes like it slower. And indeed with colder water also they retrieve need to be slower. And really, in authum the fly need to be retrieve slow to ultra slow. That’s how i like it and the success was mine. 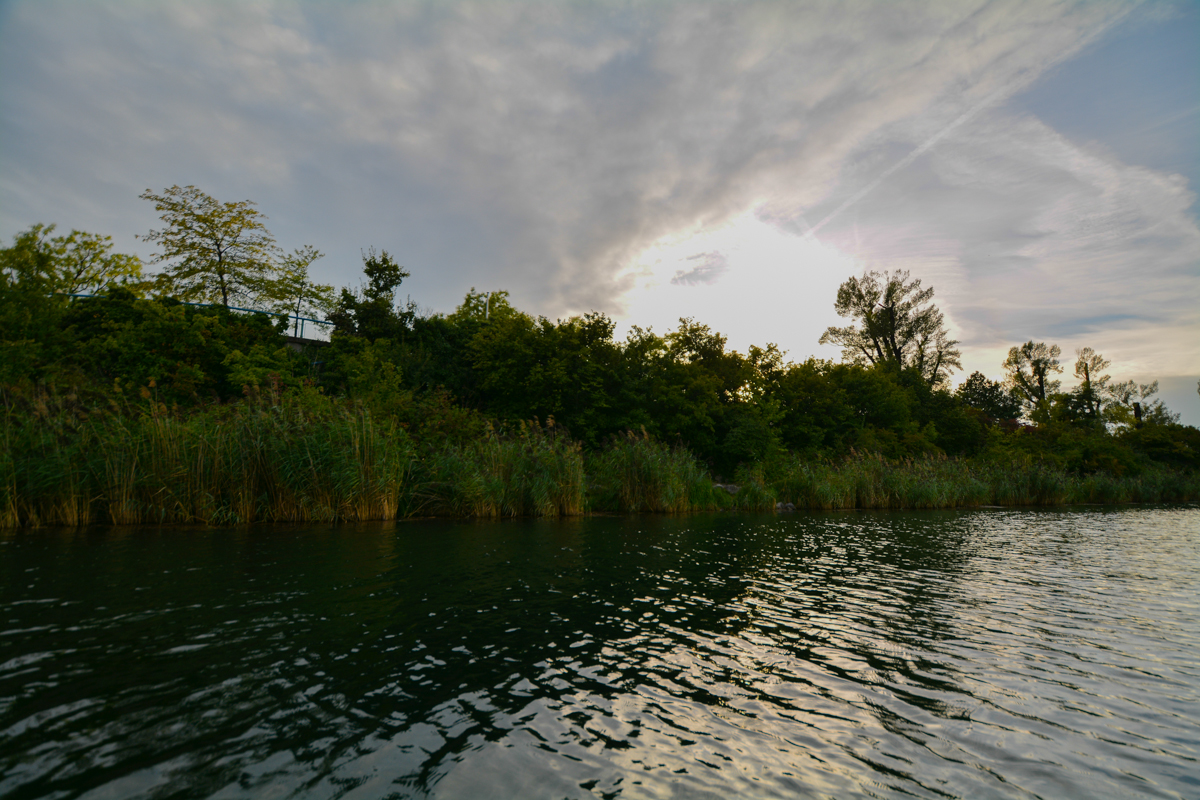 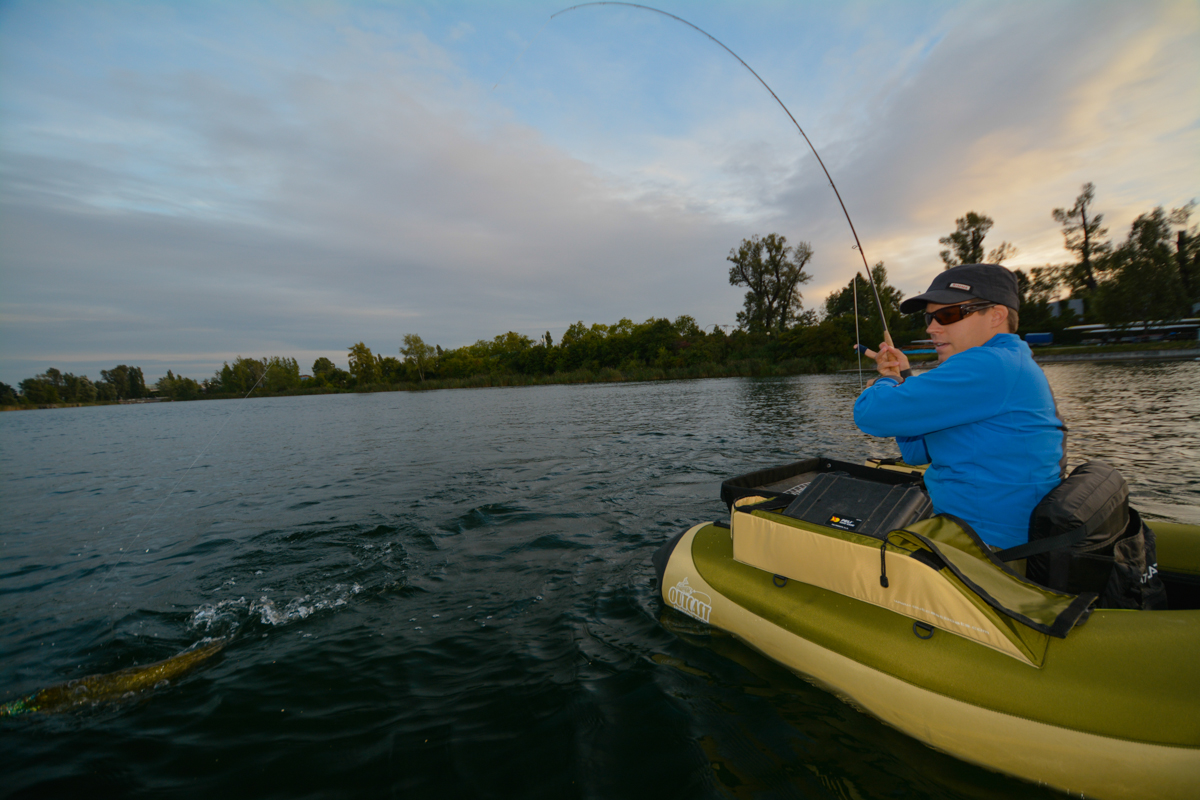 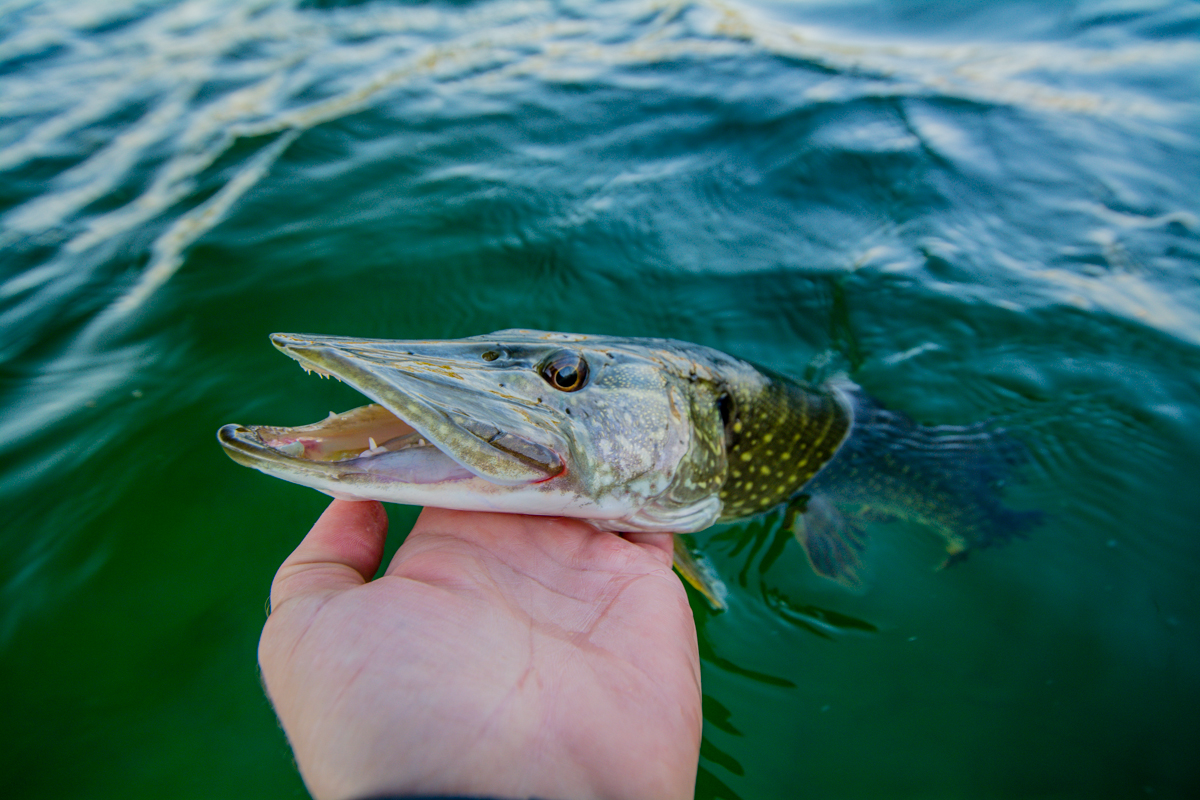 In Authum the fishery was super interesting. The water was gin clear and weed grows close to the surface. A perfect habitat for a pike. Fishing with a floating line directly over the weed with a slightly weighted fly was very exciting. Every take you could see, what made the fishery to a visual highlight. 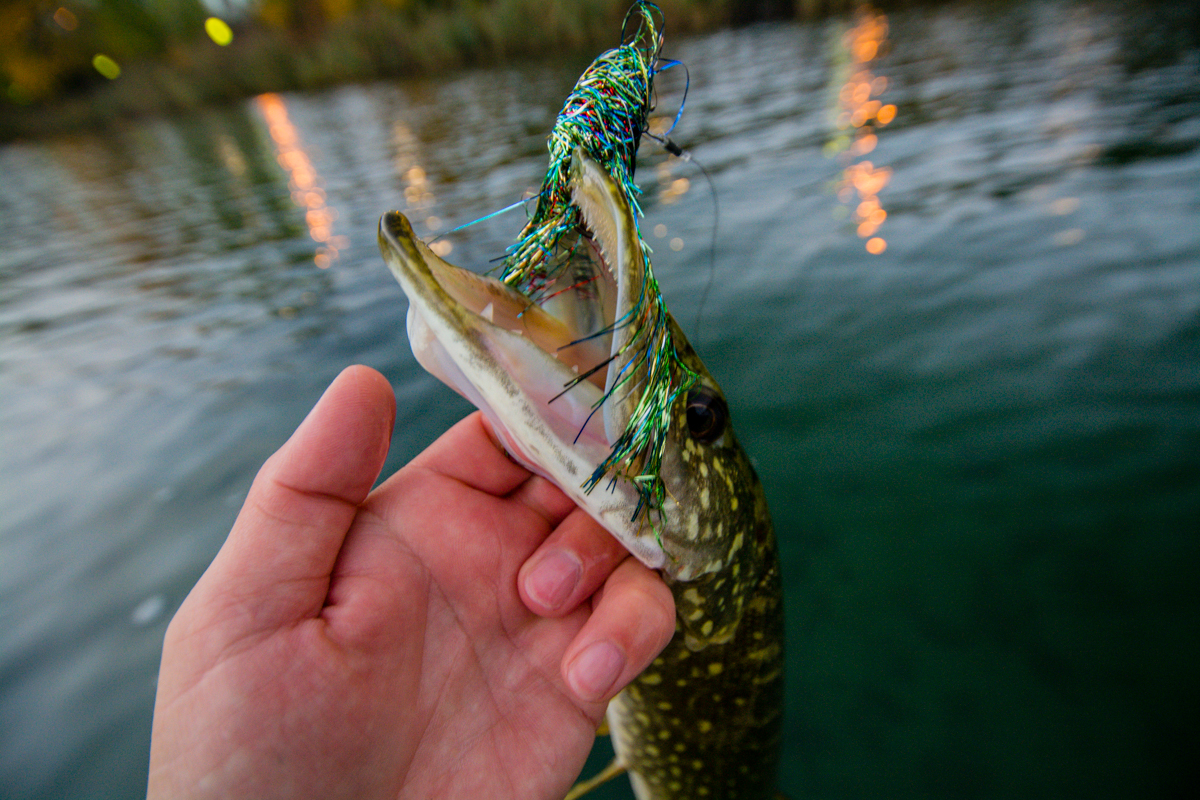 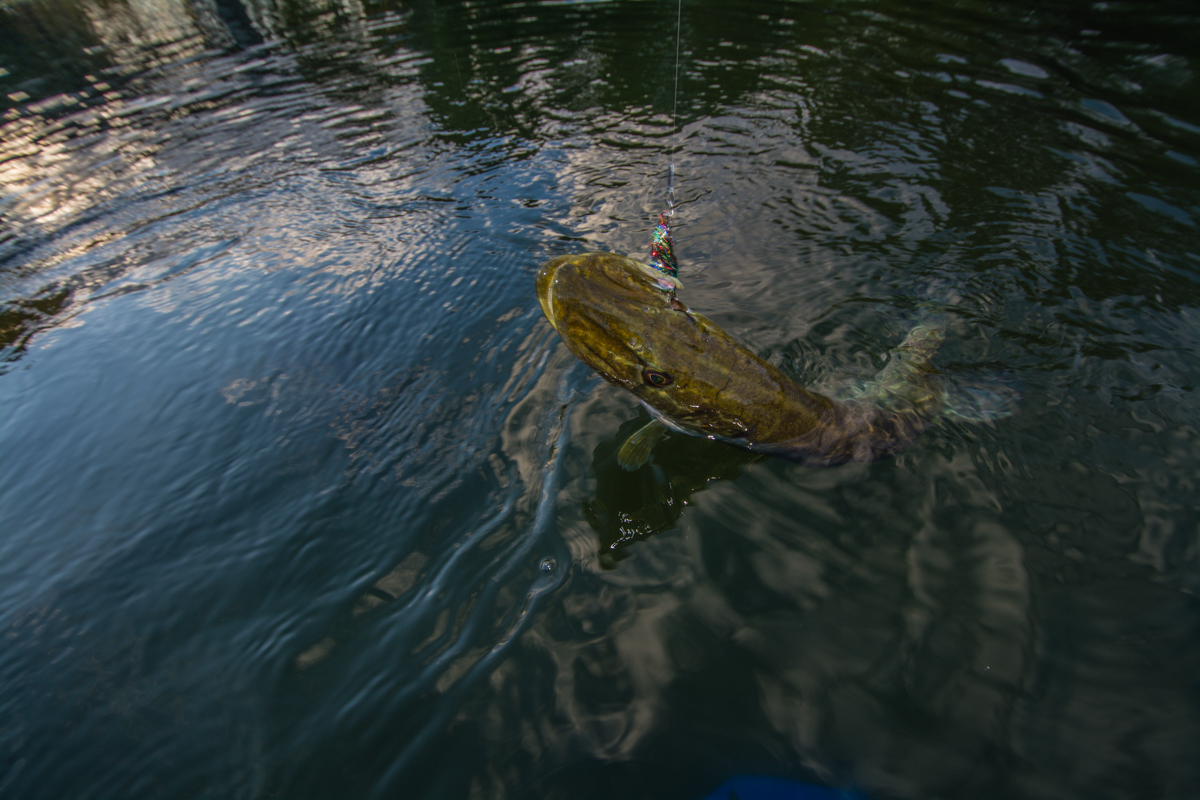 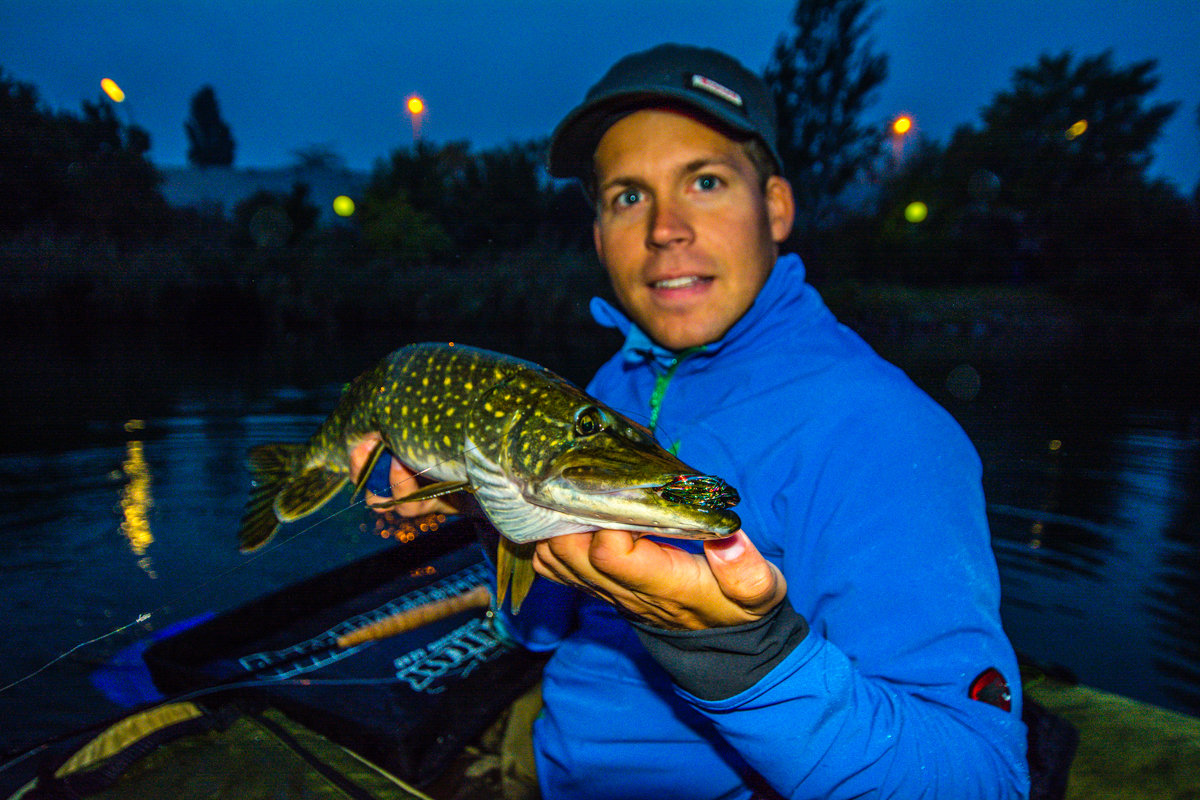 That was also the time were I really began to love my belly boat. At the begin I was not so very sure if I would really like it but slowly but steady is started to really like that thing. Interesting how close you can come to the fish and they don’t spook. For sure I had a couple of fish close to the boat, in a water with 5-6 meters of clearness.

Unfortunately I concentrated mainly on the same spots every time I went there. Even I was there many times I caught my fish. I never had the necessity to try new spots since it is not that easy. All shores are mainly covered with gardens plots or other recreation gardens. Only a few public places to reach the water. This year I will spent some time exploring new spots. 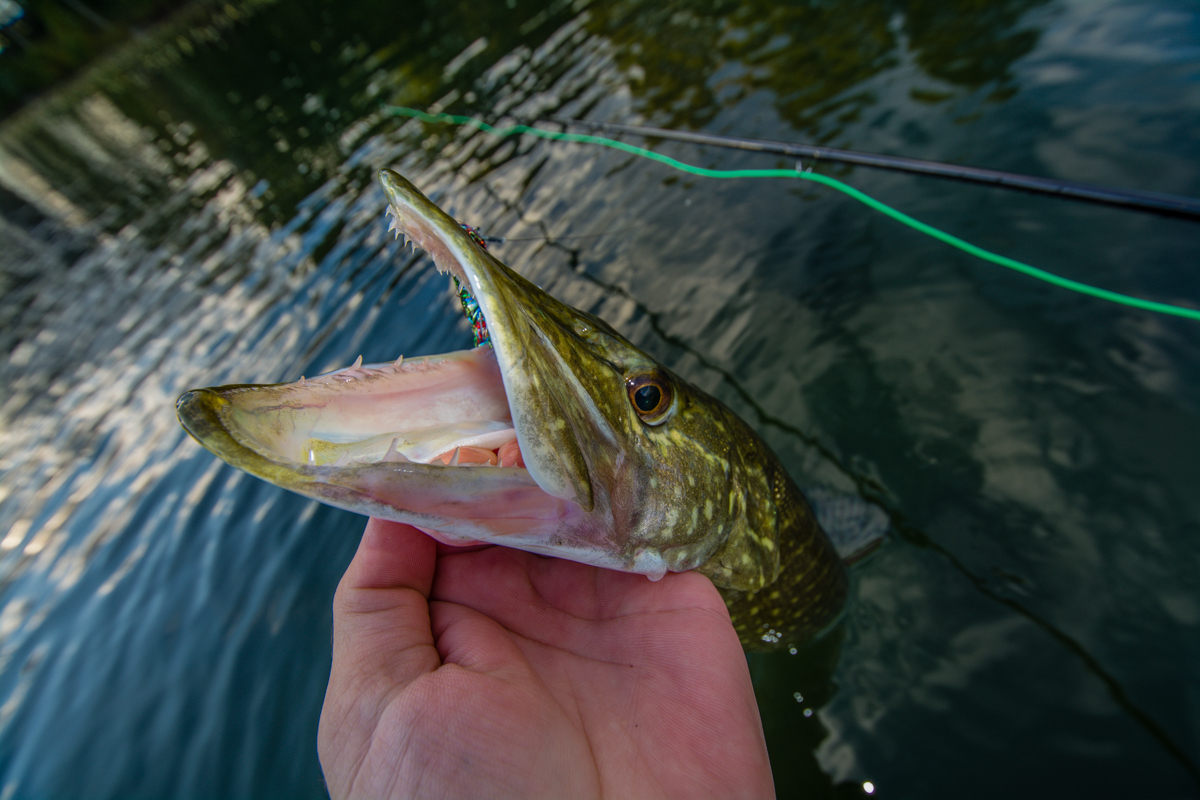 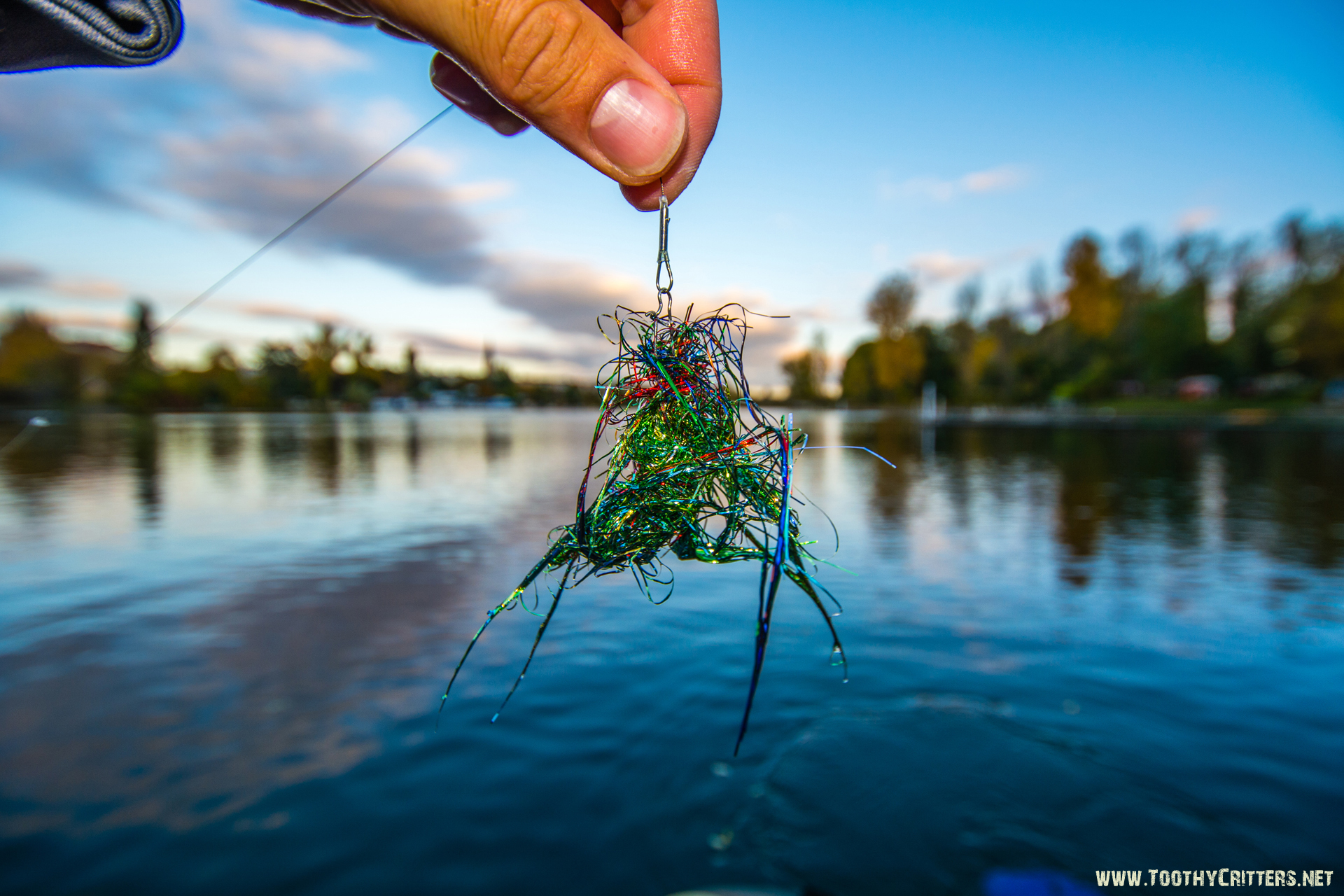 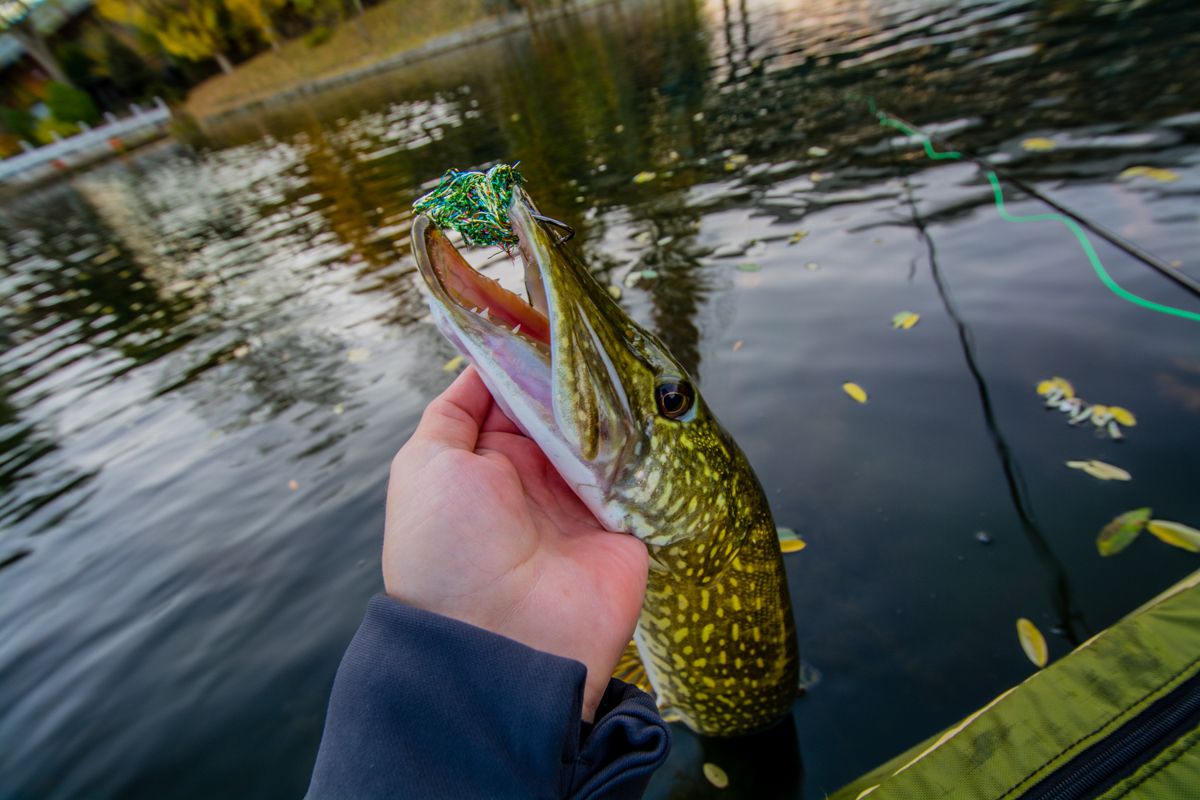 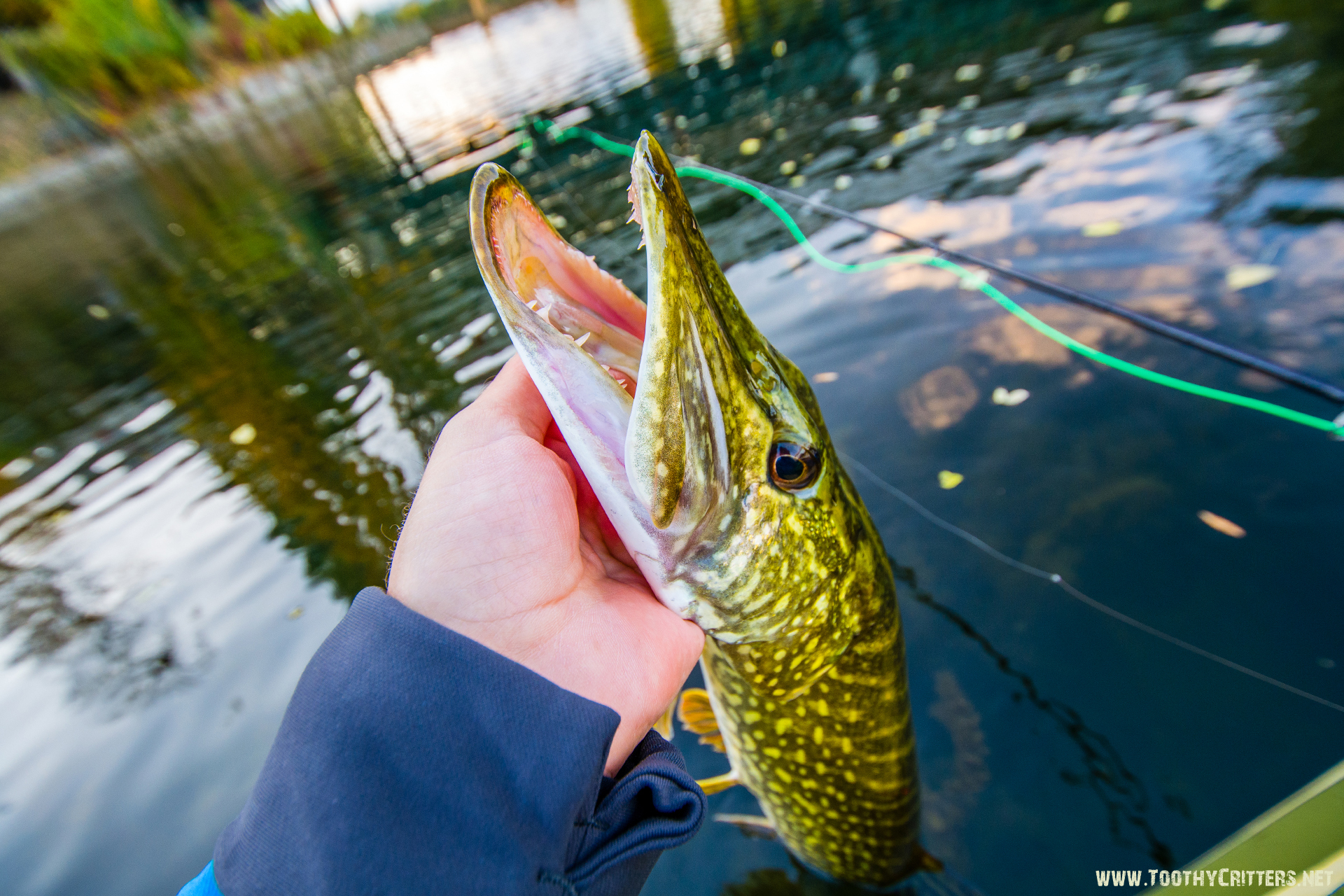