In the second part it becomes even bigger. A 90 cm GT is a good start but nothing worth traveling the half way to the moon. The weather in paradise became worse and there was not much time left to get the really big one on the fly. Is Aitutaki good for a surprise?

It was one of those days that make you feel frustrated. I woke up and the usual procedure was to check the weather. And it didn’t look all too good. It was totally overclouded and not the first glance not a day to go out fishing. The wind was blowing but was acceptable. But for some reason I decided to give it a go. I remembered a passage in a book I read recently about GTs. There it was stated that such, “not perfect” days can be good as well. I believed in the capabilities of my guide and the possibility that especially the bad weather days offer some surprises. In general fully overclouded days are not bad at all for spotting fish. The fish will be hard to spot but they can’t see you either. Haha.. lets go fishing.

If you expect a story about a Bonefish today.. Sorry thats a GT only story….

Number 1. We started on the same flat where I caught some days ago my first GT. The wind made it hard to pole the boat through the reef. It was a hard job for Rua. I looked at him and I saw that he was not using his normal polarizers but instead he was using some… I had no idea what ones he was using but they looked like he found them in an chewing gum machine for a cheap dollar or so. The sun was right on the horizon in-front of us and even with my high end Costa polarizers I had troubles to see clearly in direction of the sun. I was confused why he was using today this kind of glasses and I wanted to ask him wether I should borrow him my spare polarizers. But before I finished the thought he said the magic word that changes the day for every fly fisherman. GEET!!! 12 o’clock! What da fuck?!? How can he spot with this shitty glasses? However, there was not much time left to think how Rua did the impossible. He did it and there was a GT hanging right of a coral bommie. I began to get very excited. I made a nice cast to the left side of the coral bommie in the hope that the fish won’t spook but still recognises the fly. The plan was almost perfect. It failed partially because there was a second GT which was not visible neither to me nor to Rua. And this fish spooked right of the moment the fly dropped on his head. But what about the fish we have spotted before. He did not recognise that the other fish spooked and came around the corner and inhaled the fly without hesitation. BOOM!! I set the hook and the GT turned. All the line I had stripped of the reel shot through my hand and finally found its way through the rod guides without tangling. I tried to put as much pressure as possible onto the fish, trying to prevent too much line out that gives the fish options to cut me off. Even with my 14weight fly rod this was a mission impossible. The rod was bouncing as the fish towed us through the entire reef cornered on every coral boomie. I thought at any moment the line snapped. Multiple times I had to free the line from some coral heads. No idea why the line didn’t snap on the corals. It think I had all angels on my side. After about 10 minutes of hard fighting the GT finally lost its power and got tired. I was able to gain back some line onto the reel. Some last rounds around the boat and finally we landed the ultimate flat monster. To that day this was my biggest fish and my hardest fight on any fishing gear. It looked already quite huge in the water but in the boat it looked even bigger. At the latest after we measured it with 120cm fork length I finally knew that I found what I was looking for. 85-90lbs GT. 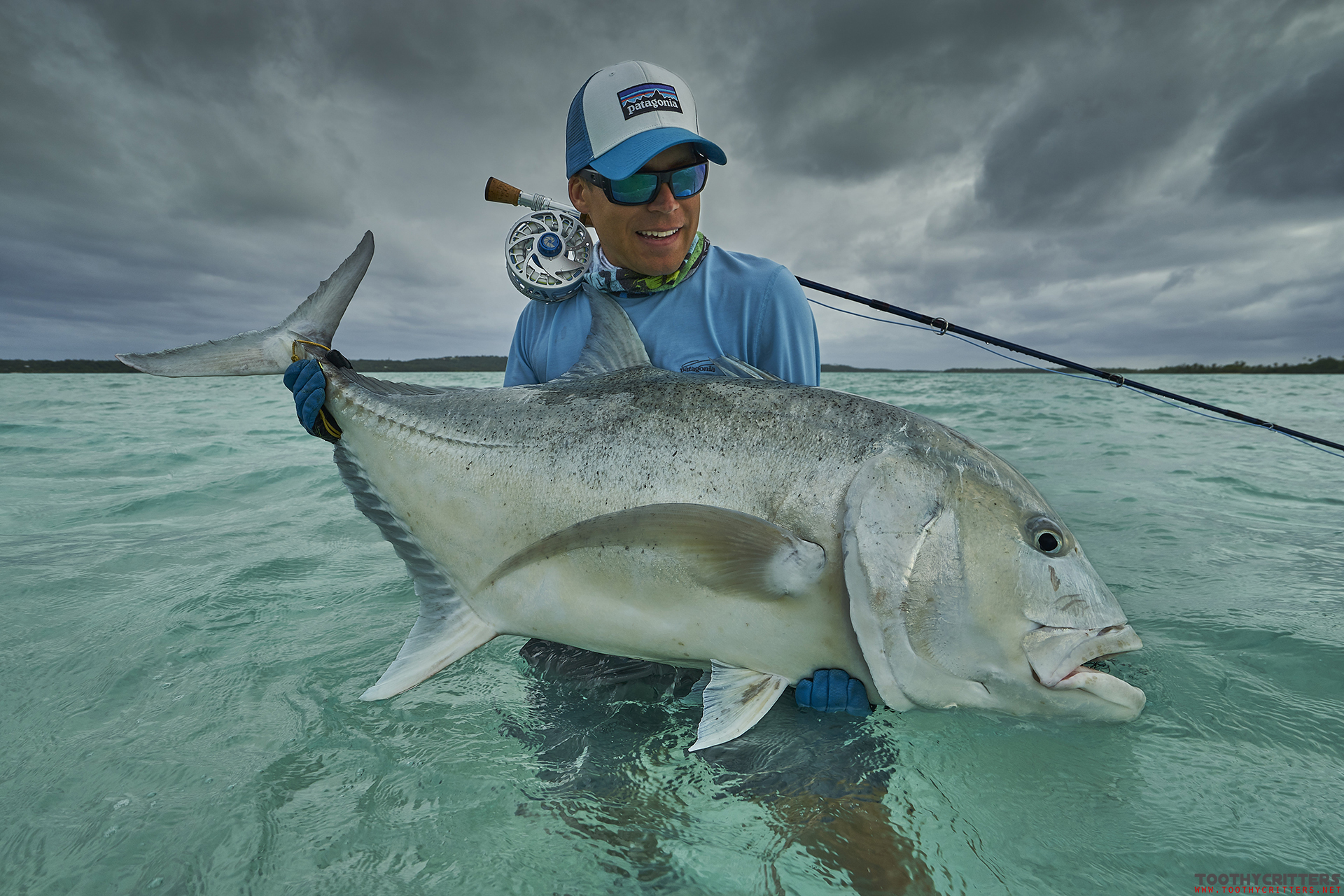 Incredible but true but the line coating was totally shredded but not the core which seemed to be still intact. Thats an attribute of the RIO Leviathan (now RIO GT).

Number 2. We fished a bit here and there for Bonefish, still drowning in endorphins. The clouds disappeared and finally it became a very nice day. Bone fishing was boring so we went for another reef to chase GTs. I couldn’t watch Rua wearing this crappy sunglasses so I gave him my Oakley polarizers. He saw fish he didn’t see before and poled the boat trough the reef very euphoric too. And then there was a gray shadow gliding over a coral bommie like a submarine. This looks so majestic when you see such a big fish in motion without moving. The fly landed right in front of the GT and again BOOM!! My Nautilus Monster was screaming its usual song and I fought as if there was no tomorrow. The fish was smaller but the fight not much shorter. I was still a bit exhausted from the first fish. In the end we landed a nice 95cm GT. Wow two fish on one single day. Big smile and big fish.. Incredible!!! Aitutaki did it again. 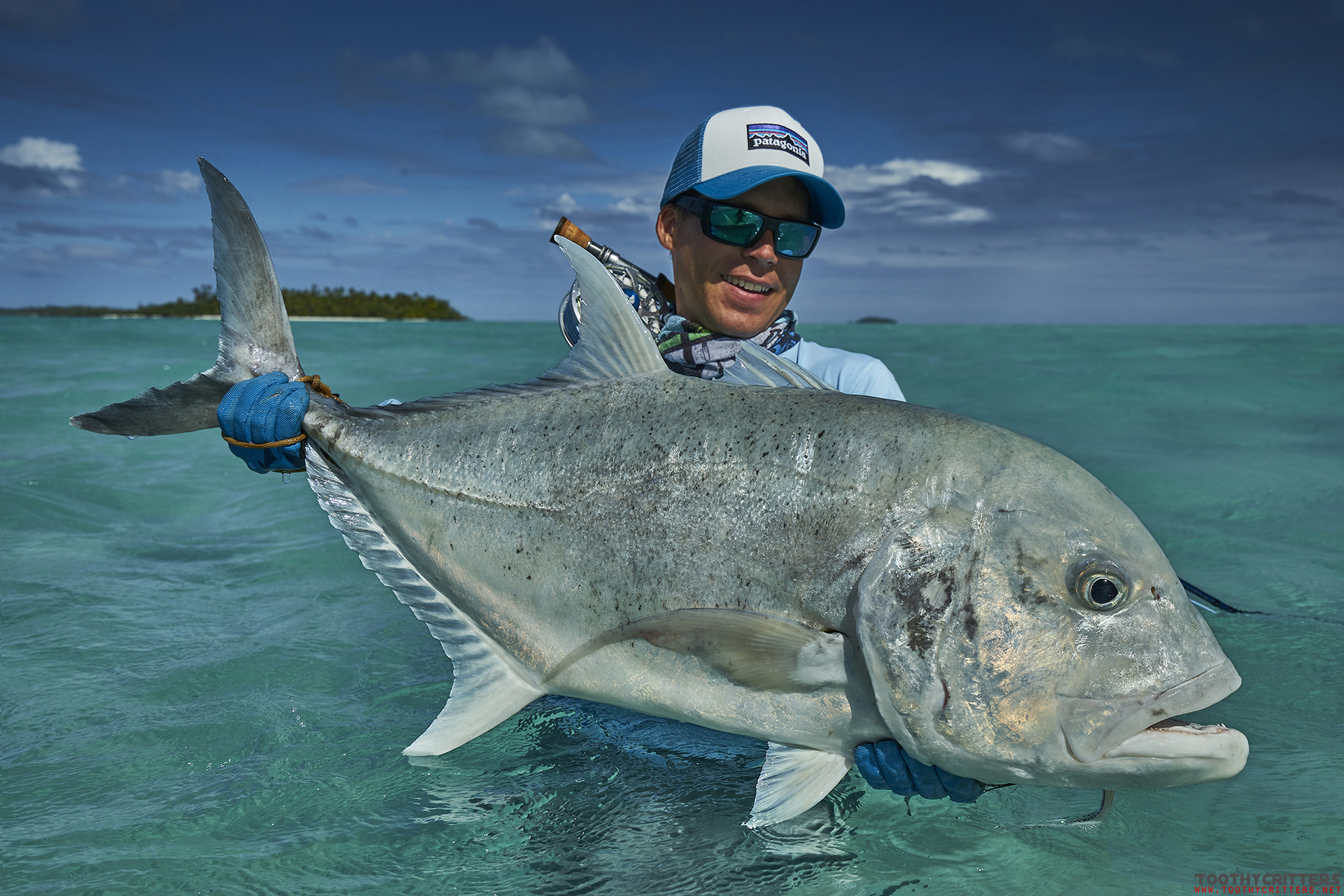 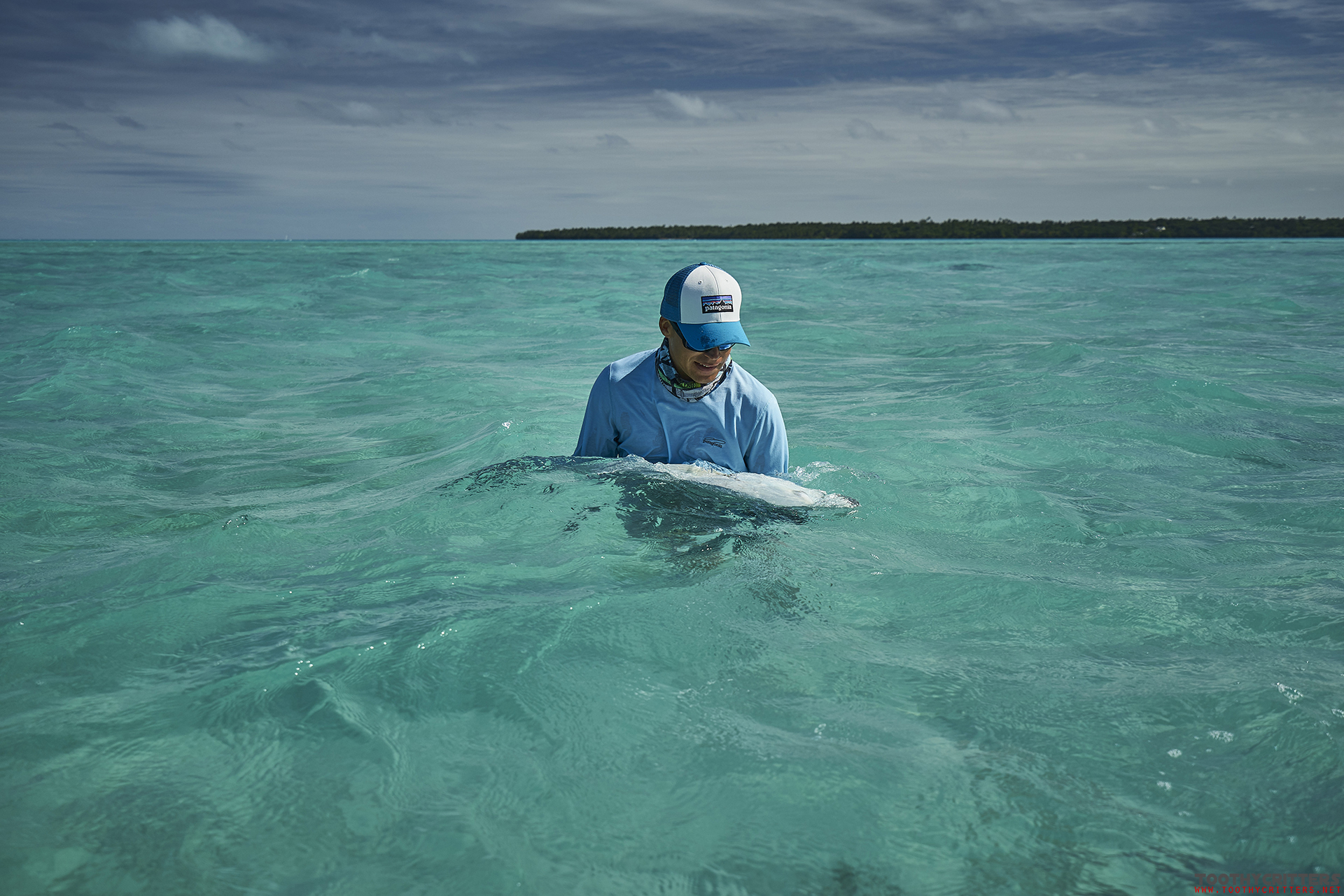 Number 3. The topping would be a last nice bonefish before calling the day. The next bonefish flat was close and we gave it a try. I stripped line off the reel preparing for the fishing and…. another two GTs appeared behind our backs…. such days really exist and I almost didn’t went fishing. I threw away the bonefish gear whilst the GTs came in range quickly. I ripped some line off the Nautilus Monster and and with just two false casts I cast the fly right in front of his mouth and with some hectic movements of his pectoral fins it engulfed the fly. I struck hard as the GT was blasting away into the middle of the lagoon. Except one coral head there was only sand around us. The perfect terrain to fight a big GT. I put on the brakes, applying maximum pressure with my hand on the reel to prevent the GT reaching this coral bommie. Almost there I was at the end of my power. The reel spool knob hammered against my thumb still with minor impact on the fishes speed. In the end and I believe the GT was already on the coral he was tiring too and with the last power in my arms I gained back line and finally reeled him home. Like in trance I was finishing the fight and put a cord around his caudal fin. The fish was save in my hands and with 107cm (fork length) and maybe 30kg a fish of a lifetime too. Another epic fight ended with a big smile. Even Rua smiled like no day before.. 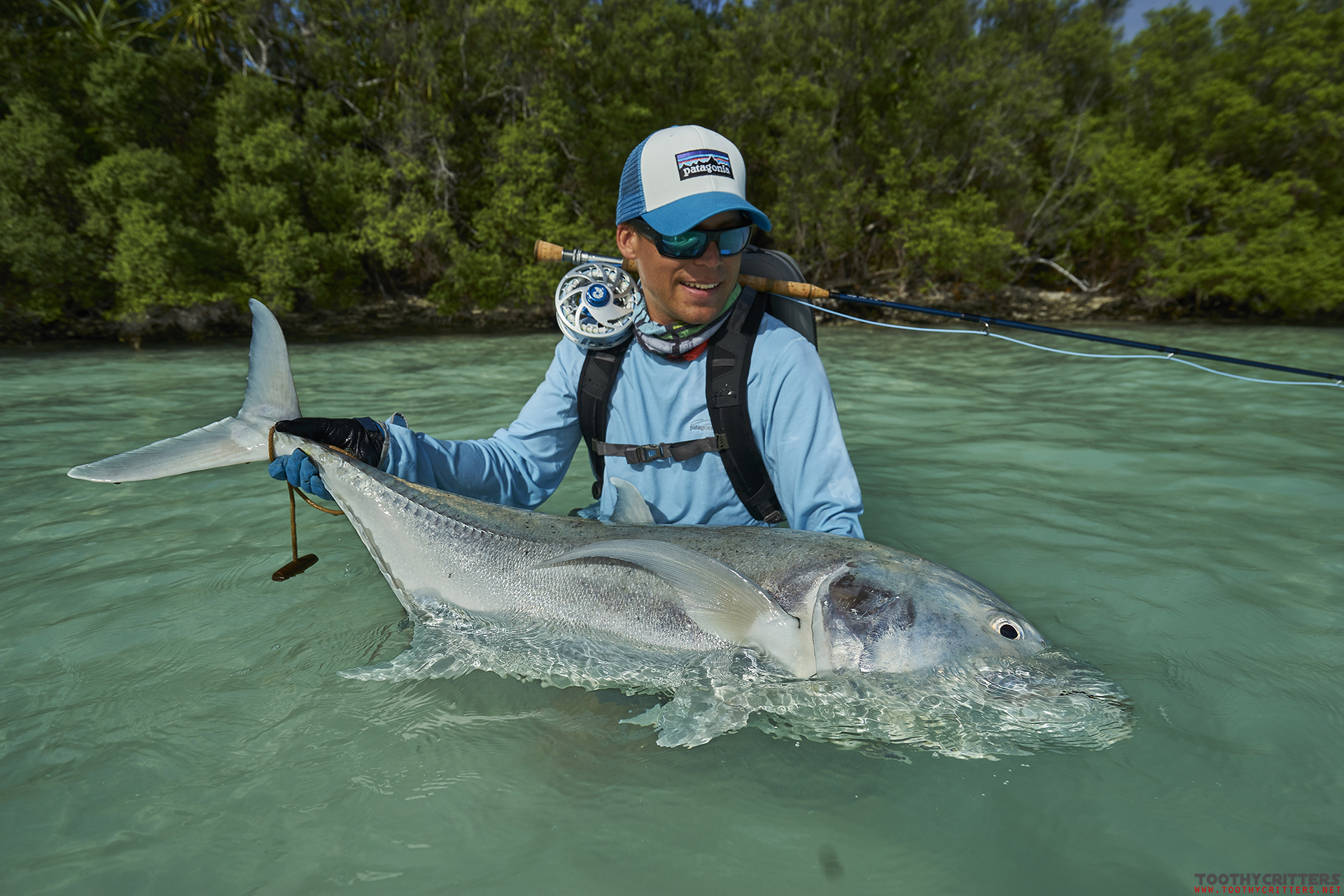 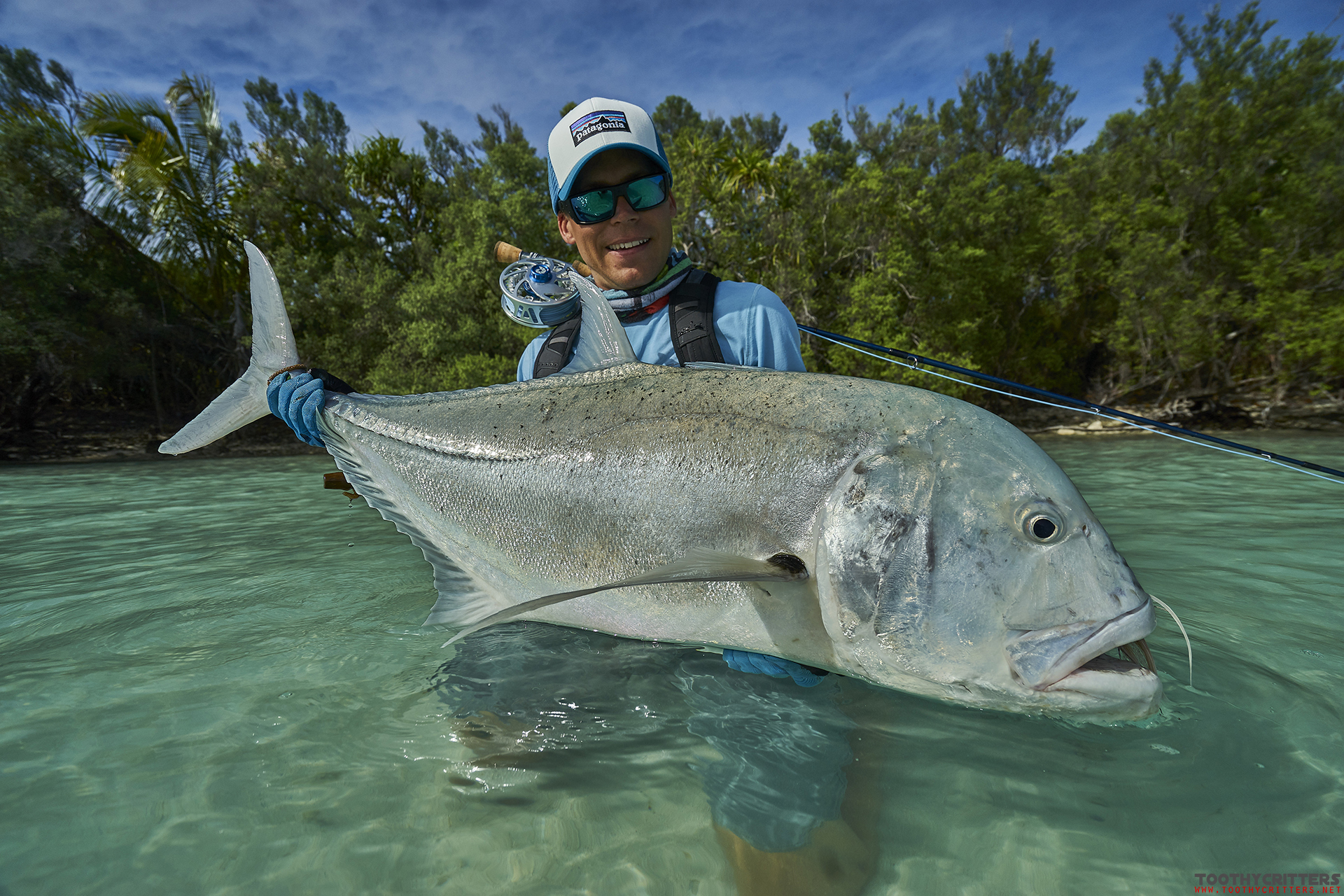 No number 4., we called it a day when it was the nicest. Time to relax and think about it again. A dream came true and Aitutaki has proven that it is not only a prime bonefish destination but also dreams of a big GT can become true in paradise. 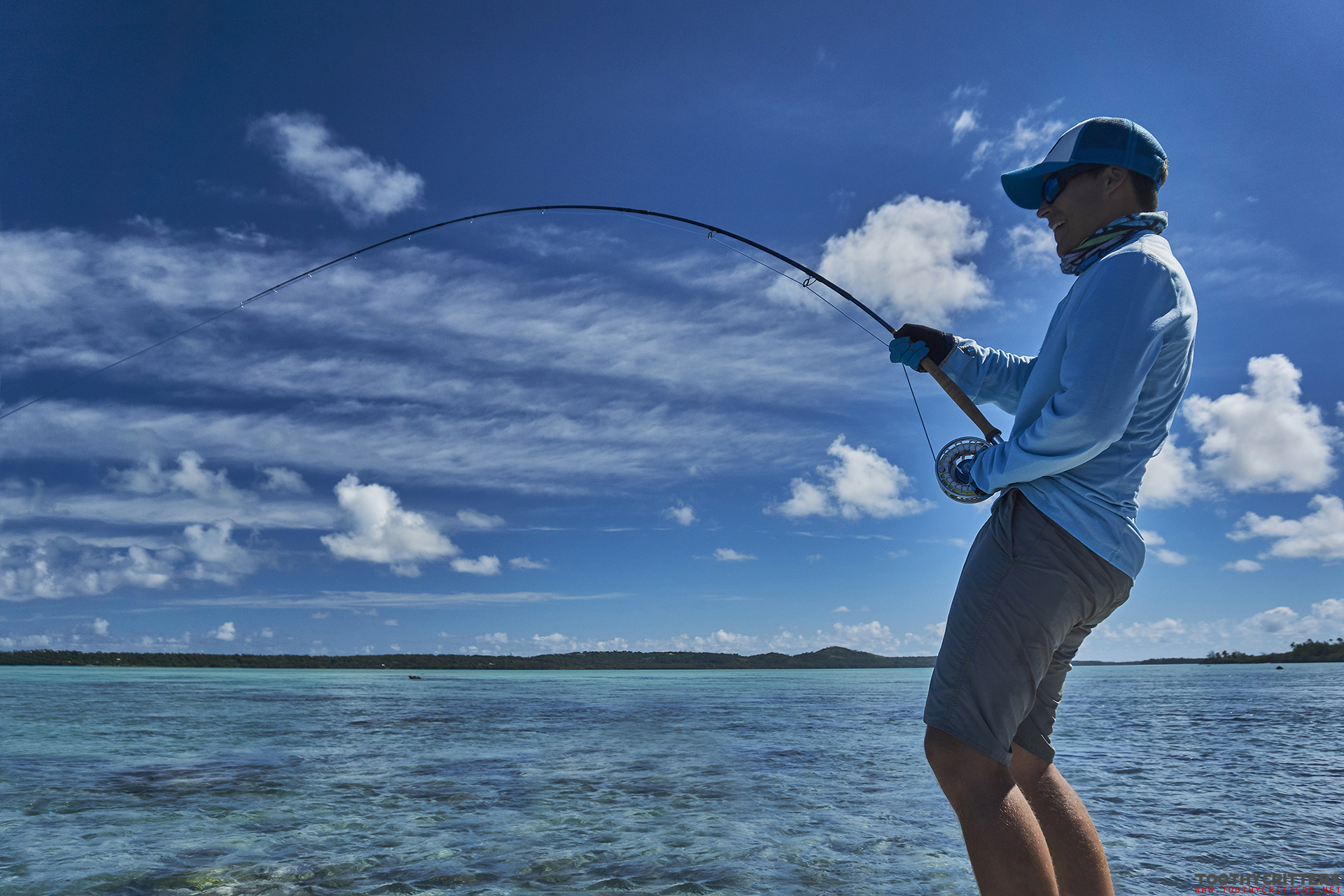 Tight lines and keep on dreaming of your personal giant
Philipp