Two things you need to catch a fish. A line and on its end a hook. And the hook is the subject of this blog. Hooks for pike fly fishing

What’s a good hook? Have you ever thought about this question? What’s the characteristics that makes a good hook? Sharpness? Strength? Shape? Price?

I have tried already many many hooks and I came across all kind of shapes. Finally I fished good and bad hooks. Still I’m not at the end the quest for the best pike fly hook.

Sharpness is without doubt the most important aspect on a fishing hook. But is sharp, sharp enough? Not always. I haven’t found many hooks that are as sharp as it can be. What manufacturers consider as a sharp hook isn’t really sharp. I’m always sharpening my hooks even the best of the best, no matter new or old. Sharp is not sharp enough!

The second most important aspect is the shape of the hook. And here exists a quite a lot of different shapes on the market. Long hook shanks support bigger fly patterns but tend to loose fish during the fight because of the prying effect. They also have disadvantages in setting the hook. Short hook shanks are much more modern, many times stronger and have clear advantages in fighting fish. But they aren’t simply big enough to hold much material.

On third place comes not the strength but the weight. If you are not permanently casting with a #10 weight fly rod you might value a lightweight hook that allows lighter fly patterns. Casting lighter flies is much more comfortable and is more than just a fun factor. Strength is not entirely out of scope but any large size hook for pike is in fact strong enough for the biggest pikes. For salt water fly patterns this is a different story but that would blow up the topic about pike fly hooks.

And here are the candidates for this review (not sorted). 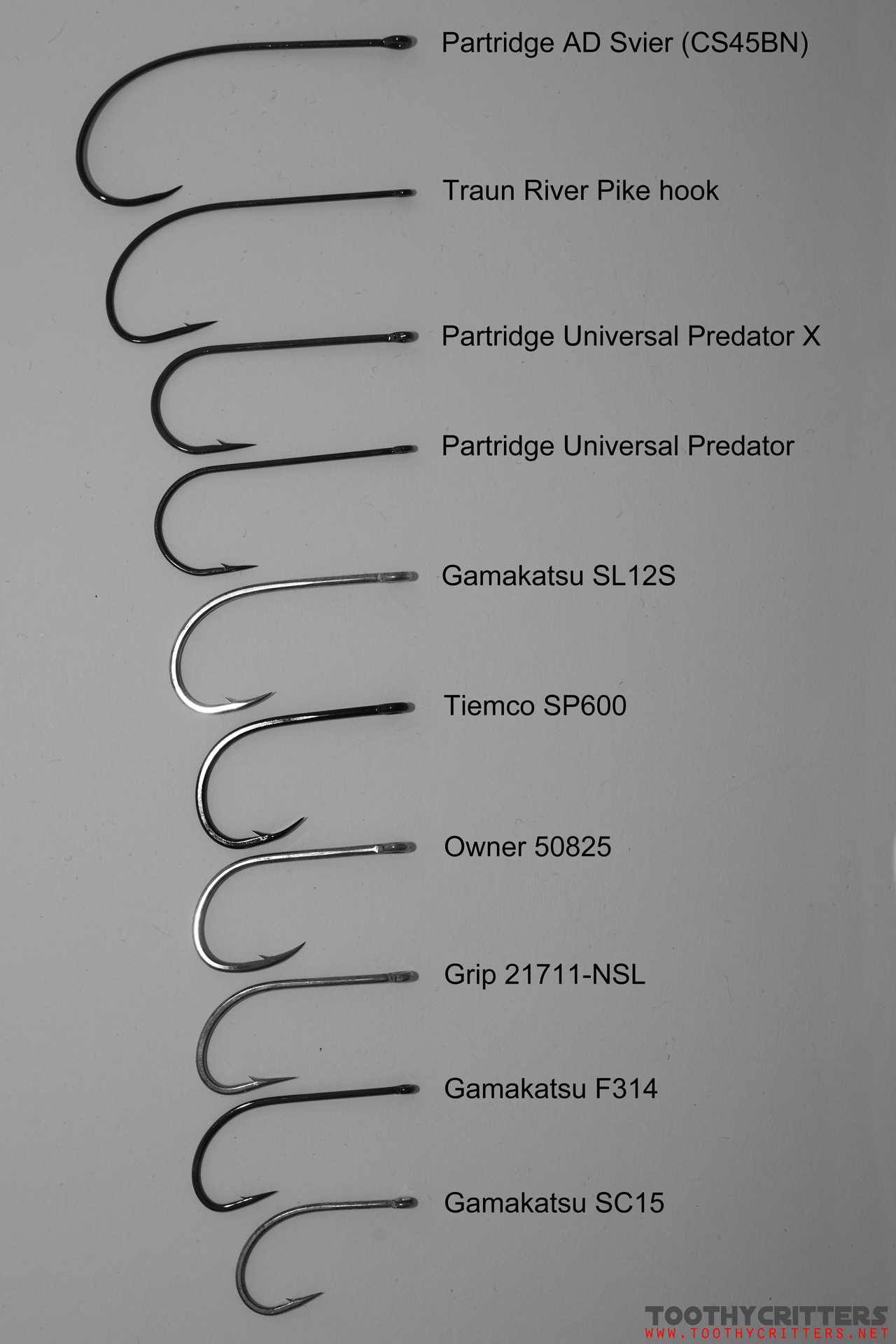 1) Partridge AD Swier Absolute Pike hook
The Absolute Pike hook is as the name indicates a special hook for pike fly fishing. This doesn’t make it a better fishing hook. To be honest, I don’t like this hook. It is a huge hook, already at 4/0 that is quite lightweight but far away from being sharp. It is the least sharp hook in this review. Positively to be mentioned here is that it has no barb and basically a nice shape for larger pike fly patterns.

2) Traun River Premium pike hook
This is a brand new hook that is seeking its customers. Its a very big hook that isn’t as strong as the others but fairly strong enough for pikes. Its sharp but not super sharp. For very big fly patterns a clear recommendation as for example the AD Swier Absolute Pike hook.

3) Partridge Universal Predator and Predator X
This is a very classic fly hook that existed already as nobody thought about fly fishing for pikes. It is a very long shanked hook but also having a large gap between shank and hook point. It is an ultra sharp hook that is by far more sharp than the previously mentioned TIEMCO SP600. It is also lightweight and can be used for larger fly patterns. The version X is an extra strong version of this hook. It is not as sharp as the normal version but still one of the sharpest

4) Gamakatsu SL12S
This is a classic Saltwater Hook that can be also fished for pike. Its a very strong hook that is often used for tarpon patterns. Like many Gamakatsu hooks it has a more soft hook point that bends hitting hard an obstacle. This is is a big benefit because the hook point won’t break off so the hook lasts significantly longer. Its very sharp and lightweight. The hook point slightly points inward that helps setting the hook in the pikes mouth gap. Larger hook sizes like 6/0 or higher are far more heavier and only usable for large and bulky fly patterns. But If you don’t mind casting a very heavy and large flies this is the hook to go.

5) TIEMCO SP600
This is the classic large fish hook that is mostly used by pike fly fisherman. It has an almost perfect shape and is strong enough to master most of fly fishing situations for any kind of fish. TIEMCO calls this spear point “SP” because of its point shape. It is a sharp hook but far away from being really sharp. For pike fly fishing I recommend to sharpen this hook right out of the package. It is also a very heavy hook that makes it less ideal for lighter fly patterns such as flash flies.

6) Owner 50825
There is no perfect hook but this Owner hook with its sexy number 50825 is a secret hero. It has a very attractive shape, is razor sharp, strong and is not too heavy. And even the price is very appealing. From its size itself its not the biggest hook on the market but big enough for medium to large pike fly patterns. The size 6/0 has roughly the same size as a 3/0 Tiemco SP. It is also the only hook in this review that has a offset break point which I believe also helps to penetrates quickly. Together with the Gamakatsu F314 this is my number one hook.

7) Grip 21711-NSL
I don’t know why I bought this hook a few years back and I haven’t used it much but it is worth to mention it in this review. I like the shape of the hook and it is a well made hook. Problematic is mainly the missing sharpness. Its really a dull hook. If you don’t mind to sharpen it carefully its a valid alternative to the other hooks I have mentioned here.

8) Gamakatsu F314
A rather small hook, max size 2/0, is my mostly favored hook in this review. Its sharp as as hell, lightweight, strong enough and cheap. I like its shape because it fits best for my flash fly patterns. I always clip the barb and sharpen it slightly which is not entirely necessary but makes it from 95% to 100% sharp.

9) Gamakatsu SC15
Like the SL12S above the SC15 is a classic saltwater hook. Its sharper than any other hook I have ever used, including all hooks in this review. Its a super light hook and having a very interesting shape. This sounds like a perfect hook but it is as 3/0 very small that can only be used for smaller fly patterns. But for patterns below 5 to max 6 inches my number one. Also available as SC15-2H being double as strong, double heavy and far less sharp. For pike not recommendable.

For me, especially important is sharpness and lightness. Herewith I can recommend the following hooks without restriction. Smaller to medium size pike flies: Gamakatsu SC15 or F314. Medium to Bigger pike flies the clear winner is the Owner 50825. This hook would be also my recommendation for tube fly hooks.

And If you are the opinion that there is a better pike fly hook out there. Please let me know and I test it and will add it to my review.

One thought on “The ultimative pike fly hook?”