The best comes at last. There is one fish missing in the hall of fame catch list

I do not want to make it long exciting because I think you know already what I will talk about. After bonefish, tarpon and shark, there is only one fish missing, the permit. What should I say. The Permit is a damn fish. So many fisherman failed catching one on the fly and even more failed at least hooking one. I have experienced the permit not as spooky as a bonefish. Rather, I suspect that the fish just knows that we can not hurt them from distance. Often they ignore you and swim slowly away, else than the bones who get panic quickly. Even the guides on Los Roques get very euphoric when it comes for permit. Not even they catch a lot of them although they are very good fly fisher.

I got one!! I attribute this to two factors. 1) I was not desperate to catch one and 2) I fished inside my comfort zone. First sounds funny but I think it is the key to success. I was not uptight and approached them more relaxed as others do. If I had not hooked one the world would not have collapsed for me. The desperate fly fisher have more stress and make more mistakes in their stressful situation. Furthermore, I always stayed in my comfort zone with this kind of fishing. Lets say I’ve done what I can with what I feel comfortable. This is my beginner recommendation for permit fishing. Don’t make any experiments, fish the fly rod you can handle the best. Fish the fly line you feel most comfortable and stick to leaders you trust. I was fishing my favorite fly rod, the 8 weight Sage ONE, because I knew that I can most precisely serve the fly with it. Actually a class or two undersized for Permit but the problem of fighting the fish I faded out firstly. First I wanted to get him on the hook.

Also selecting the casting position I have chosen as it was most convenient for me. That’s of course only possible when you see the fish in time. Then you have time to change position. Unbelievable but true, I saw my permit around 70 yards ahead swimming towards us. Even such a big fish will appear on this distance very very small. That must have been God’s guidance :). The bite itself was very unspectacular. In passing by, he has picked up the fly from the ground. Actually, I thought the fish would immediately make kindling out my gear and run off as 10 bones on steroids would do, but it was not quite like that. Rather the permit put steady pressure on the 16 pounds leader. Unfortunately I did not have a GPS logger with me during the fight but I followed the fish a good kilometer through hip depth water. I was scared that I loose him in the endless corals. And the fish knew that and approached the corals over and over again. I ran after the fish as fast as I could, the rod as high as I could. I don’t know if this was the best strategy fighting that fish but it worked. That was the most exciting fight I have ever had. So many times I thought, that its over when the fish swam through corals. 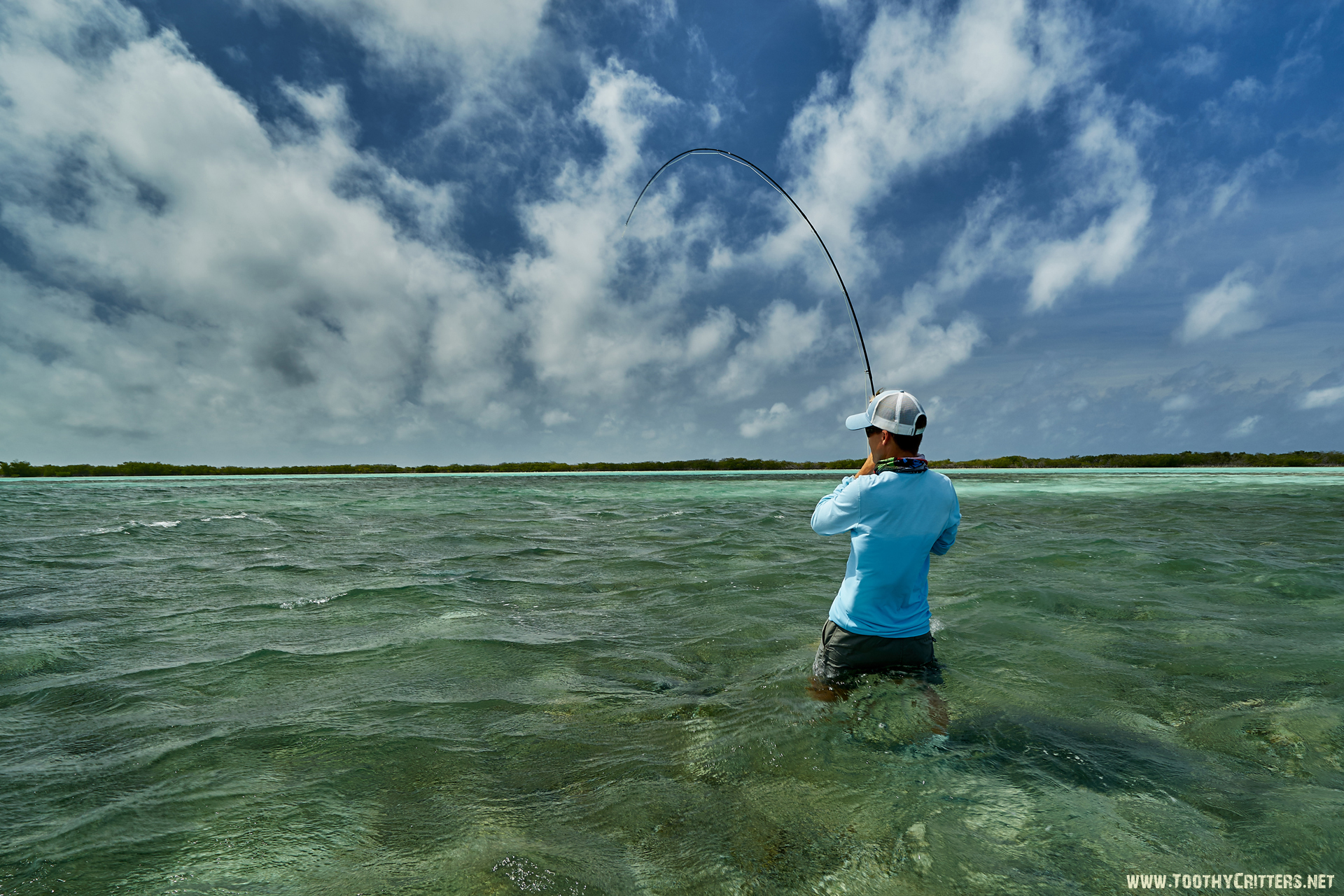 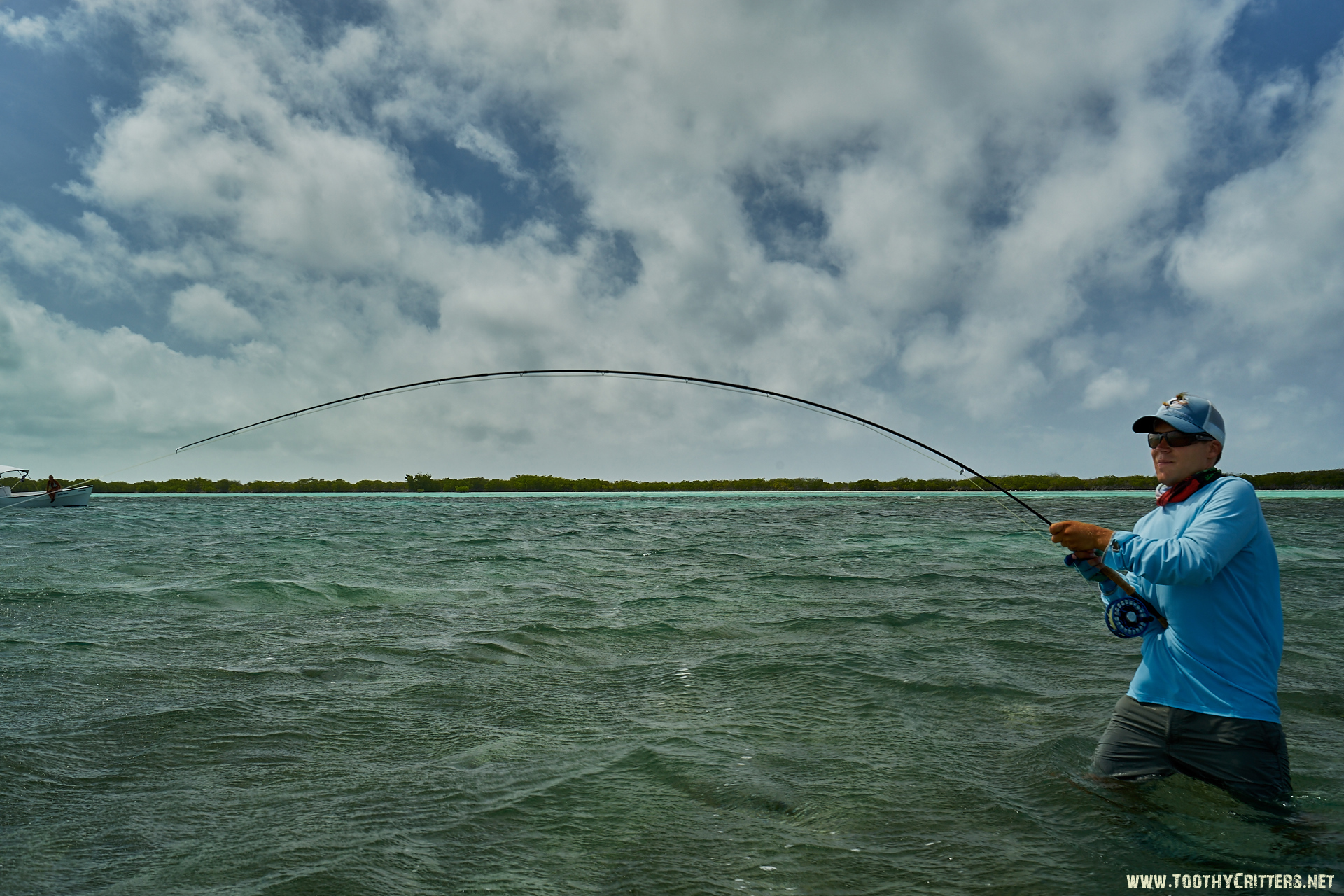 Adrenaline at a record level. The landing was also not a walk in the park. We needed a lot of tries to grab the fish’s tail. Again and again the fish gathered his last strength and launched a new flight. And with every new flight I was more and more worried to loose that fish. Initially I said that I was not desperate to catch one permit but now I was even more than desperate to land it. Maybe because this fish was a real big one. But maybe also because it is really addicting. As Javier grabbed the permit’s tail a huge load fall off my shoulders which was no heavier than a small car. My whole body was full of adrenaline and endorphins and latest now with this fish the trip to Los Roques was worth all efforts.

My very first and certainly for a long time the last. And with 25-30 pounds a real good permit. The fly of success that brought me this fish scores now a high market value for all the fishermen there. But that fly comes into an album. 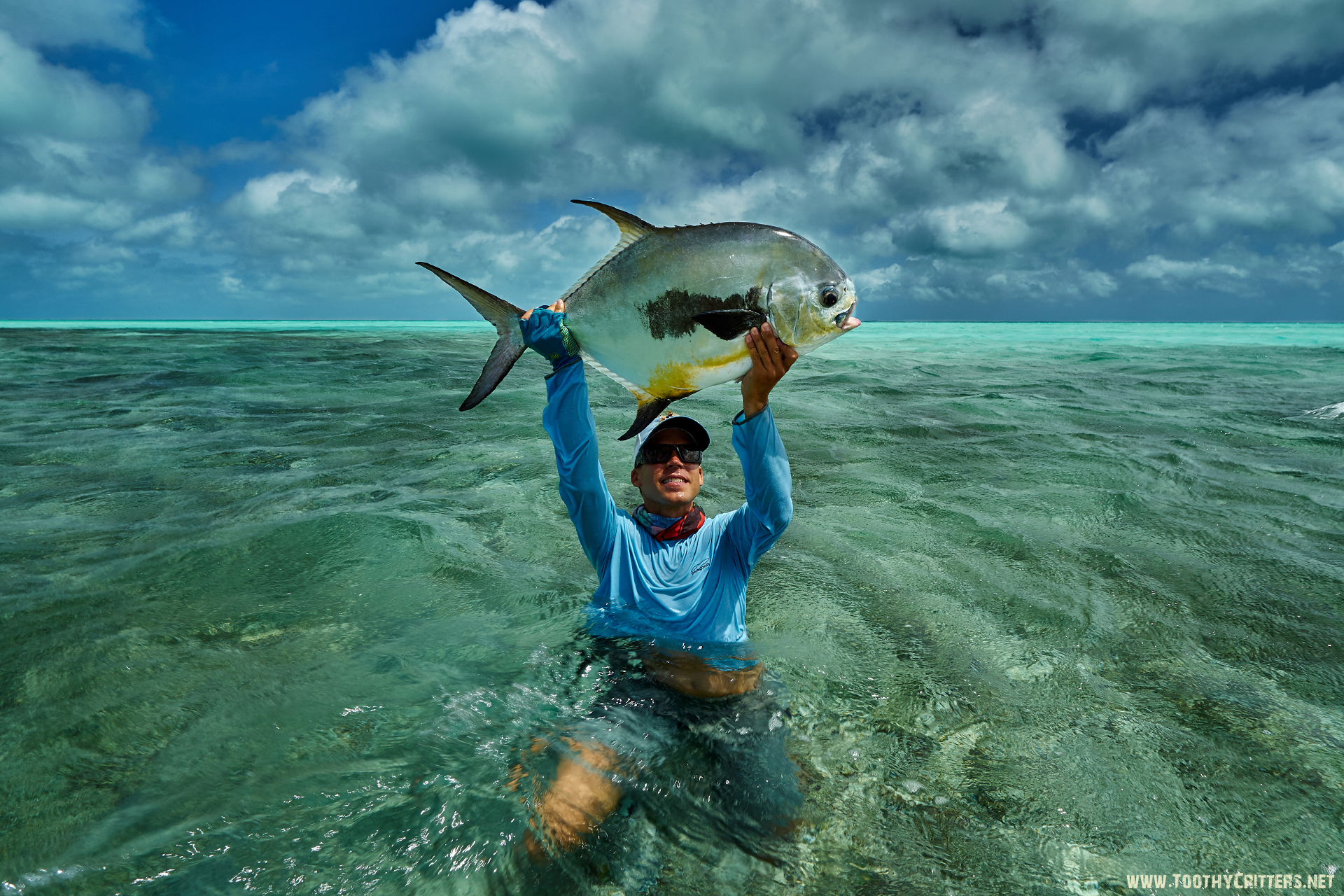 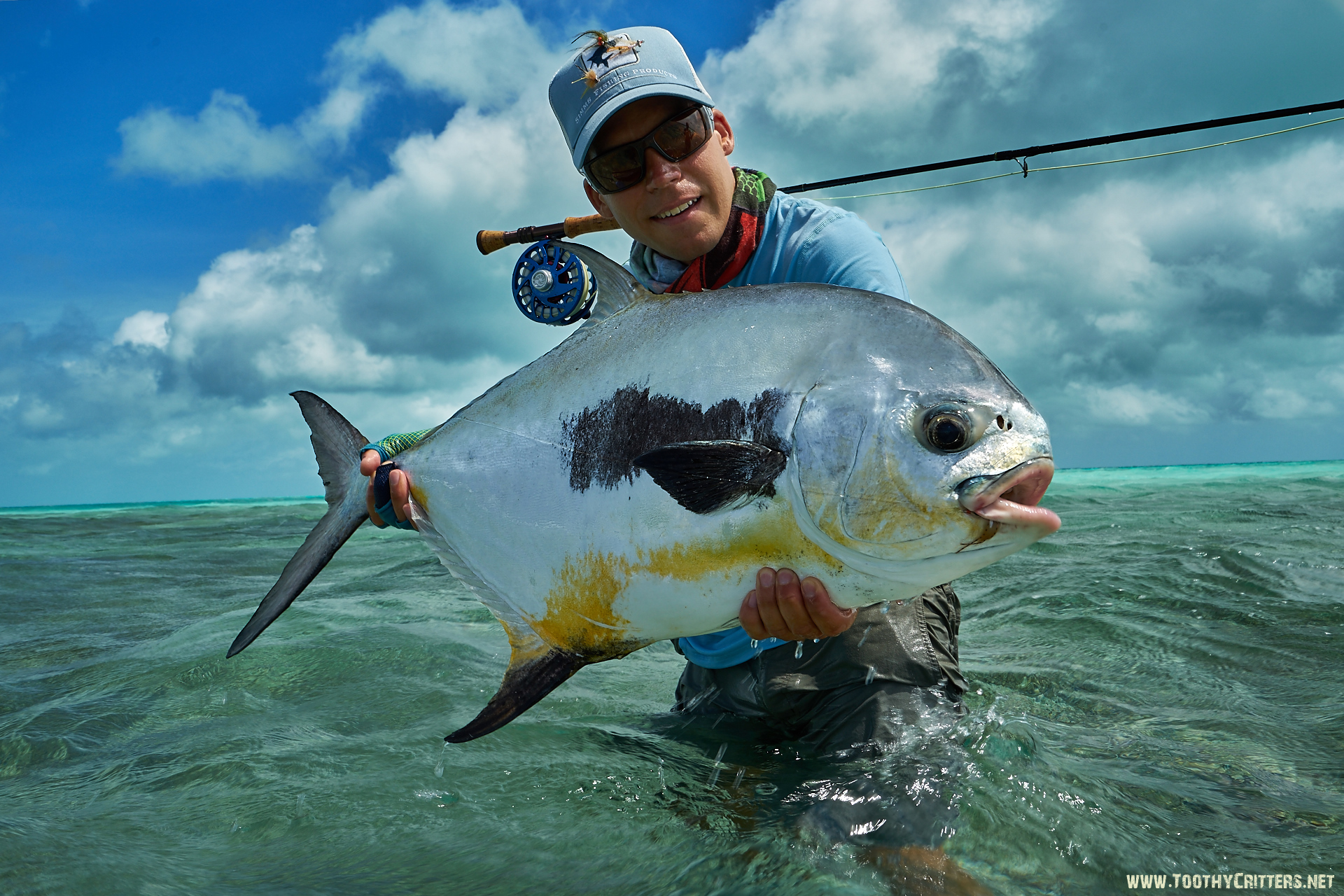 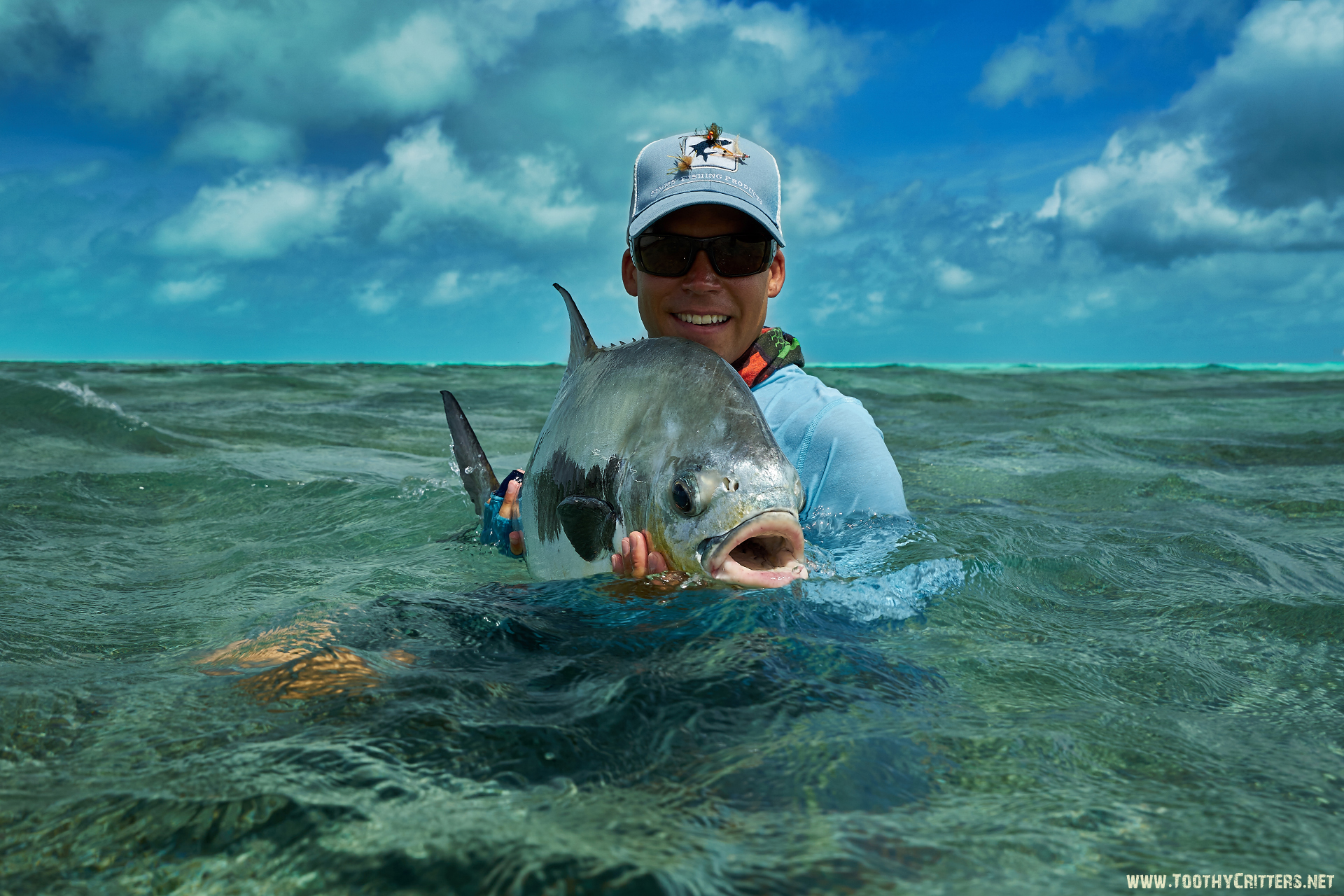 Btw. Grand Slam. We hooked the permit in the first hour of the day. So plenty of time to get the other two species. The bonefish wasn’t the problem but the tarpon turned out to be my fish of destiny. We tried all tricks, spotted behind every bush till darkness but couldn’t find a single tarpon. Nada !!!!! Never mind I got the fish of all dreams.

And more than once my 8 weight ONE has once again proven that it can do more than you might think. In only 26 minutes of fight was the pig in the poke. And with all respect, a truly beautiful permit. Man loves their prey more than the others but this Permit is really the prettiest thing I could find on the net. The drawing is a hammer compared to permits I have seen so far.

You can imagine I was some more time fishing for permit on this trip but as I initially wrote they are hard to get on the fly. Actually we saw a lot of them and had also a lot of good chances but we were not able to get another one on the hook. 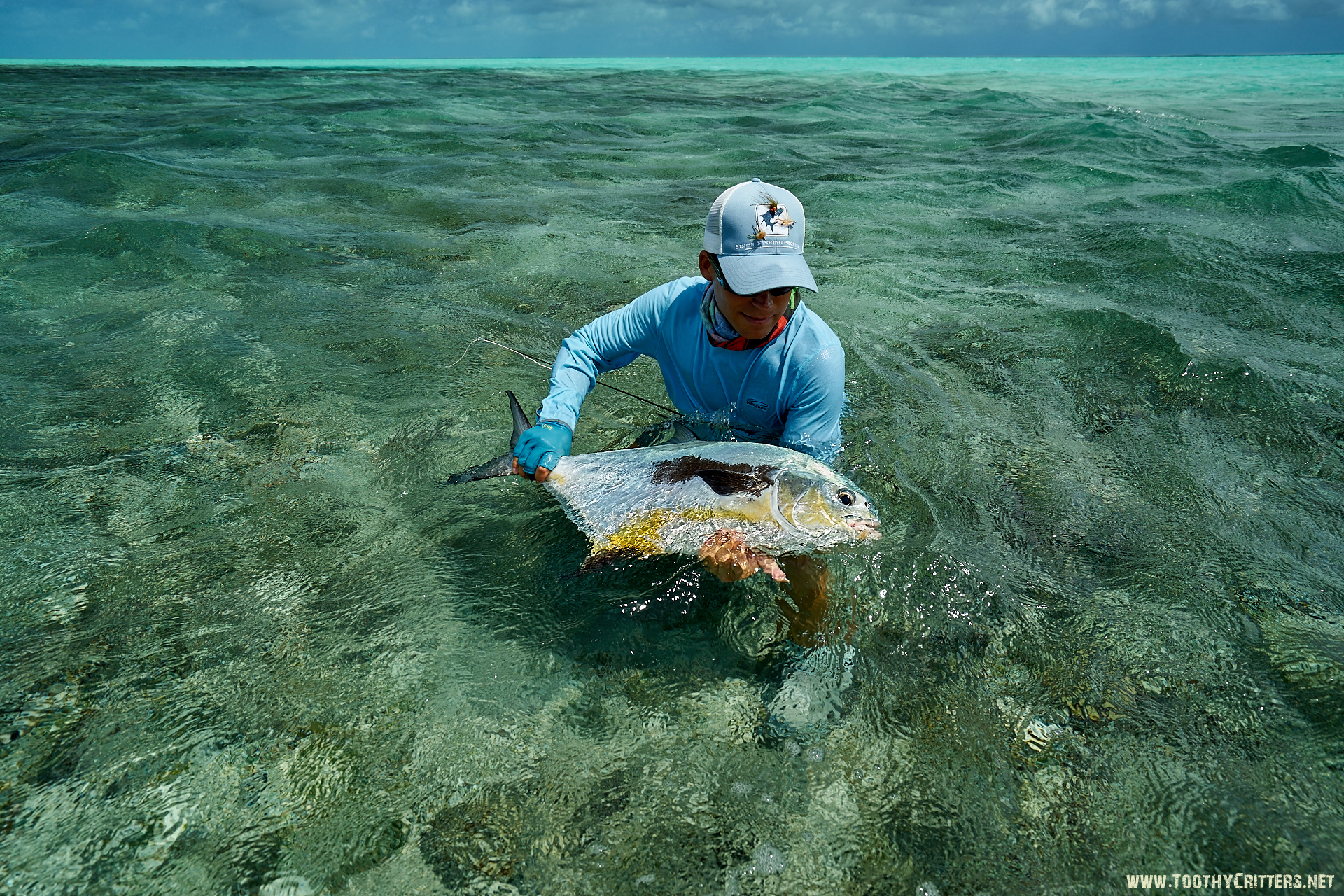 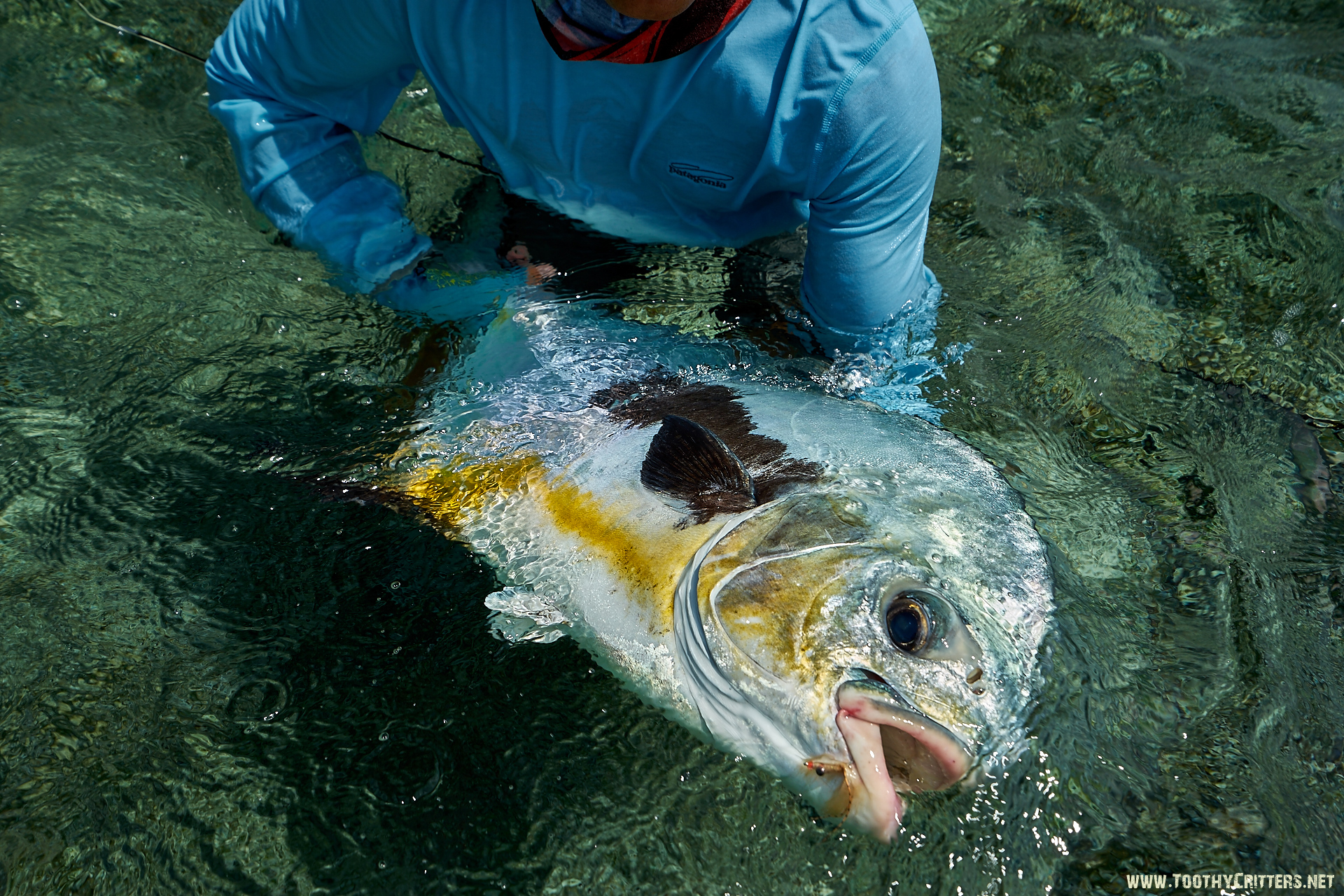 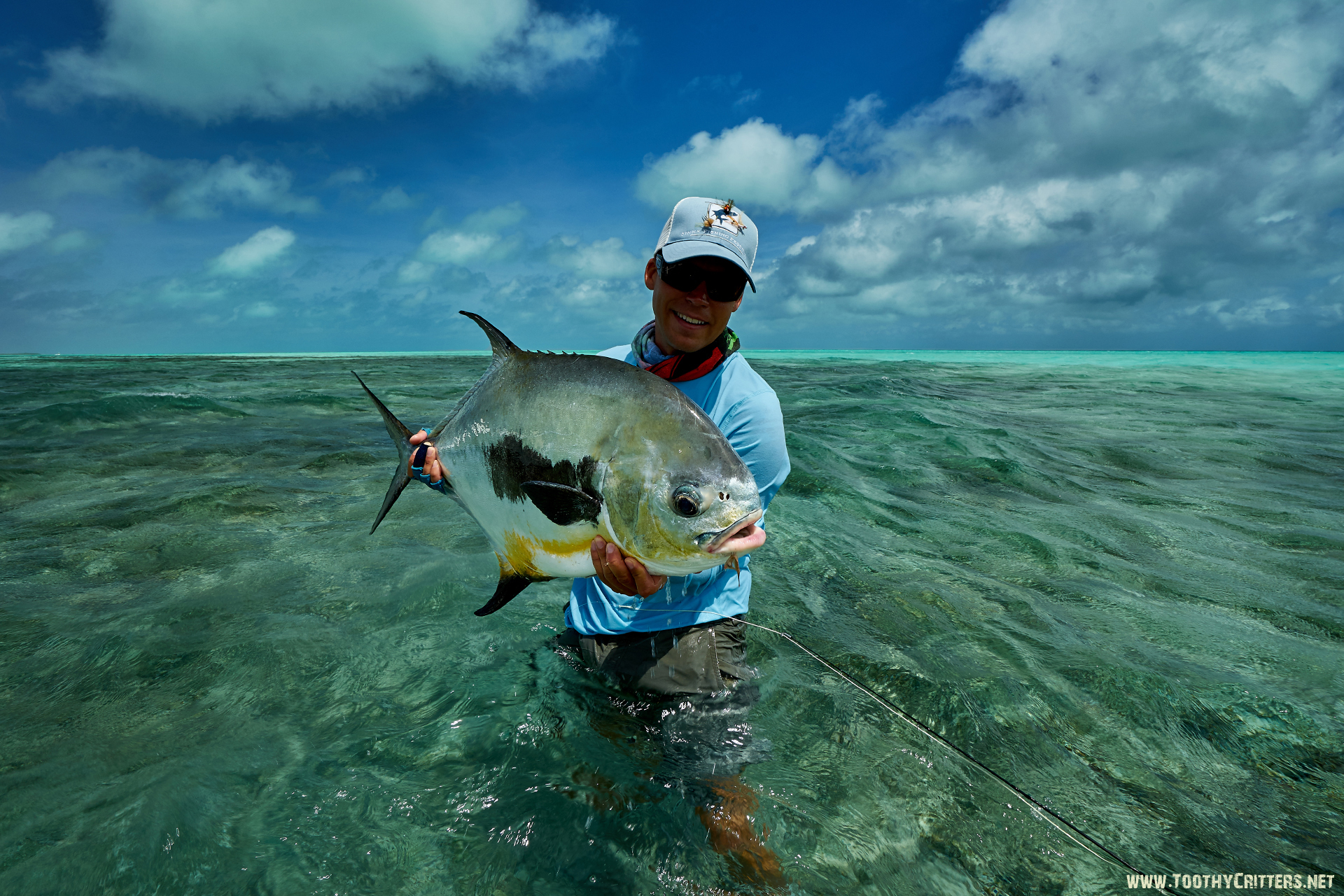 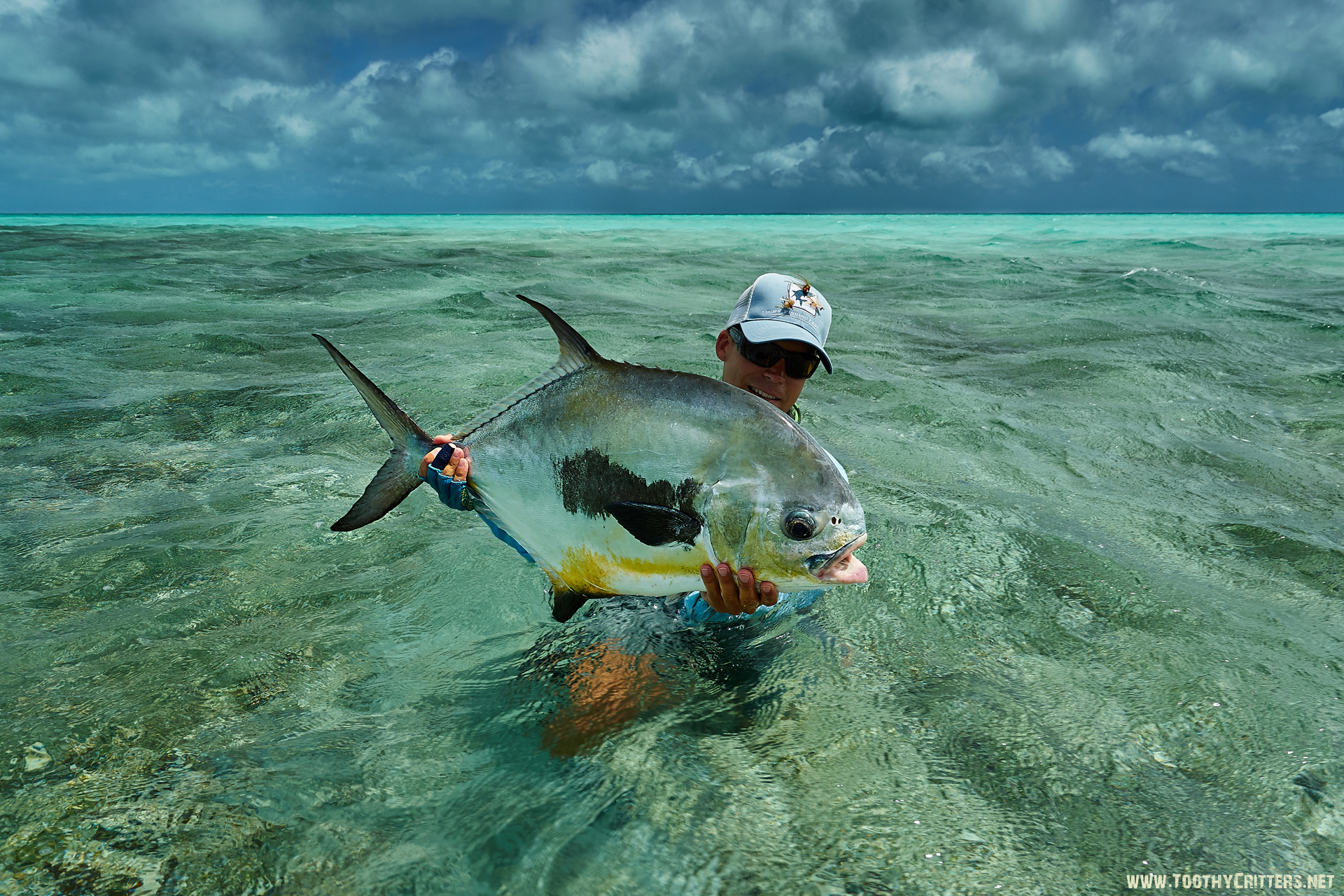 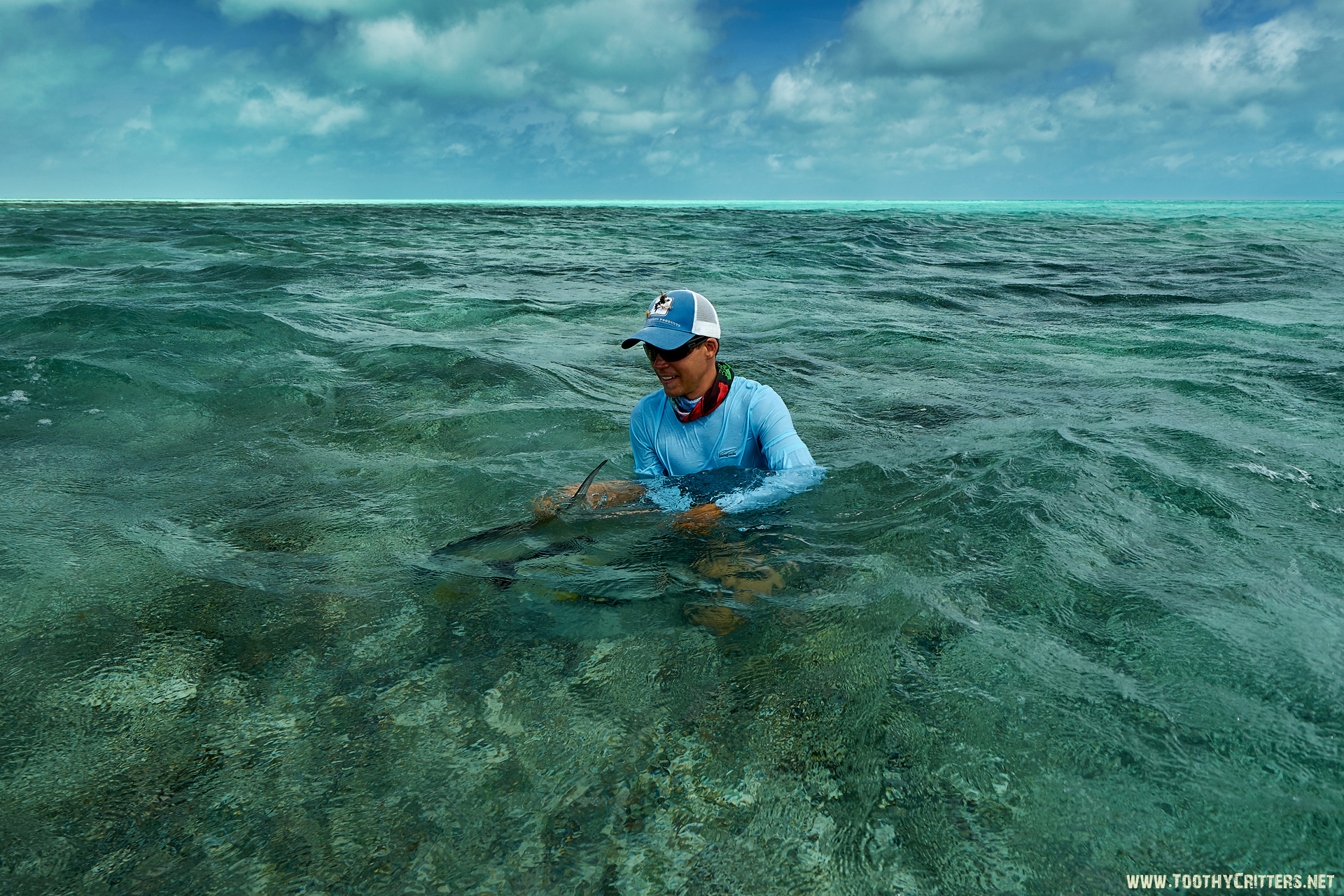 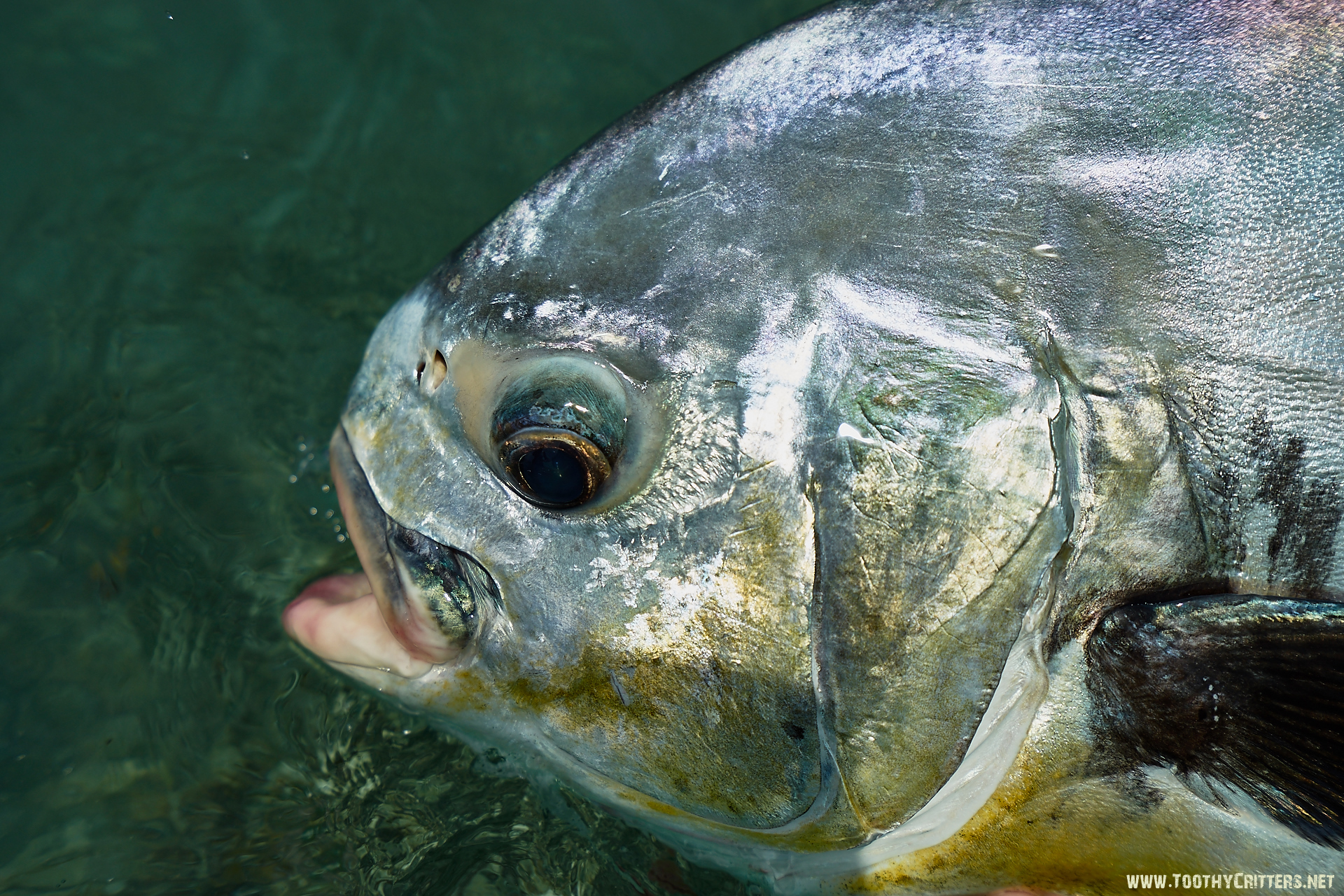